The European Union (EU) has an independent parliament and civil service which is distinct from those of the 27 member states. It has to pay for expenditure on common policies throughout the EU. Therefore, the EU has an agreed budget of €862 billion for the period 2007-2013. By comparison, the UK expenditure for 2004 alone was estimated at about €759 billion.

The EU has three elements to its government: the Council of Ministers, the European Commission and the European Parliament. All three take a part in setting the annual budget. 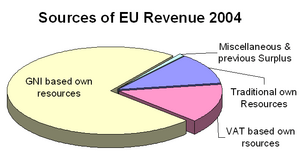 The EU obtains most of its revenue indirectly by payments from treasuries of member states. Revenue is divided into three categories.

Traditional own resources are taxes raised on behalf of the EU as a whole, principally import duties on goods brought into the EU. These are collected by the state where import occurs and passed on to the EU. States are allowed to keep a proportion of the revenue to cover administration.

VAT based own resources are taxes on EU citizens as a proportion of Value added tax in each member country. VAT rates and exemptions vary in different countries, so a formula is used to create the 'harmonised tax base'. The starting point for calculations is the total VAT raised in a country.

GNI based own resources currently forms the largest contribution to EU funding. A simple multiplier is applied to the calculated GNI for the country concerned. Revenue is currently capped at 1.24% of GNI for the EU as a whole.

The largest single expenditure item is the Common Agricultural Policy (CAP) at around 45% of the total budget. The second largest element is the regional policy, at 30%. Foreign policy consumes 8%, administration 6%, research 5%.

"As it stands today [in 2003], the EU budget is a historical relic. Expenditures, revenues and procedures are all inconsistent with the present and future state of EU integration." - The Sapir Report, 2003, p 162.

All content from Kiddle encyclopedia articles (including the article images and facts) can be freely used under Attribution-ShareAlike license, unless stated otherwise. Cite this article:
European Union budget Facts for Kids. Kiddle Encyclopedia.