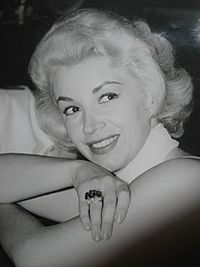 Evangelina Elizondo (28 April 1929 – October 2, 2017) was a Mexican actress, writer, painter and singer. She was born in Mexico City. She was known for her roles in Frontera Norte, El Castillo de los Monstrous, and in A Walk in the Clouds. She was also a singer known for "La sensacional Evangelina" and writer who wrote Pensamiento abierto.

All content from Kiddle encyclopedia articles (including the article images and facts) can be freely used under Attribution-ShareAlike license, unless stated otherwise. Cite this article:
Evangelina Elizondo Facts for Kids. Kiddle Encyclopedia.