Evanston is a neighborhood in the city of Cincinnati, Hamilton County, Ohio, United States. The population was 9,158 at the 2010 census.

A mostly African-American neighborhood since the 1960s, it is known as the birthplace of actress Doris Day, and is bordered by the neighborhoods of East Walnut Hills, Hyde Park, North Avondale, and Walnut Hills, as well as the City of Norwood.

The community was originally known as the village of Idlewood. It was renamed in 1893 after the city of Evanston, Illinois. Evanston was annexed to the City of Cincinnati on November 19, 1903.

O'Bryonville was annexed to the City of Cincinnati in 1870. 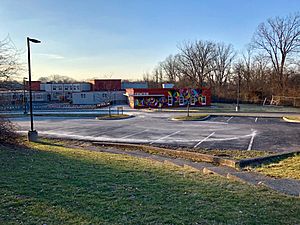 The Academy of World Languages in Evanston

All content from Kiddle encyclopedia articles (including the article images and facts) can be freely used under Attribution-ShareAlike license, unless stated otherwise. Cite this article:
Evanston, Cincinnati Facts for Kids. Kiddle Encyclopedia.