Evanston S.P.A.C.E. (or Evanston SPACE) is a small concert hall and venue for music performance and live recording, and a podcast production facility, as well as serves similarly for the visual arts and literary events located at 1245 Chicago Avenue in Evanston, Illinois, adjacent to Chicago, in close proximity to the CTA Purple Line mass transit elevated train station Dempster, just south of Dempster Avenue. It opened in spring 2008, along with Union Pizzeria, an affiliated restaurant in the same building.

It is a notable small concert space in the Chicago area, that seats about 250 people at candle-lit small round tables and as standing spectators. The SPACE has over the years played host to the most renowned folk music artists in the Western World; for example, only in 2014-2015 winter timeframe to Suzanne Vega, Leo Kottke, Justin Townes Earle and Robyn Hitchcock, among many tens of events.

S.P.A.C.E. is an acronym for the Society for the Preservation of Art and Culture in Evanston. As of 2018, Bruce Finkelman and Craig Golden, through their firm 16” on Center, own, co-own, operate, and/or co-operate several music venues, including The Empty Bottle, The Promontory, Evanston S.P.A.C.E., Sonotheque (which closed in 2009), and Thalia Hall, all in and near Chicago. Finkeleman and Golde are similarly affiliated with several other restaurants and bars, both at those music venues and free-standing, including Bite Cafe, Dusek's, and Longman & Eagle.

The listening room fits about 250 guests and shows often offer a mix of reserved tables, general admission seating and standing room tickets. Shows are open to all ages and the bar sells alcoholic and non-alcoholic drinks to patrons whose hands are stamped with water-soluble black stamp. 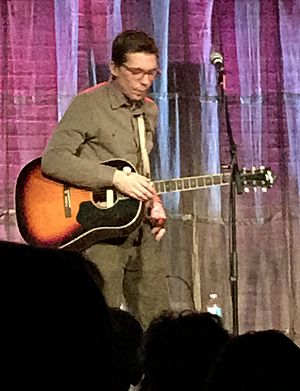 Justin Townes Earle performing at the SPACE in 2014

All content from Kiddle encyclopedia articles (including the article images and facts) can be freely used under Attribution-ShareAlike license, unless stated otherwise. Cite this article:
Evanston S.P.A.C.E. Facts for Kids. Kiddle Encyclopedia.