The Exchange Building, also known as the Merchant's Exchange Building or The Exchange, is a historic commercial building in at 15-19 West Bank Street in Petersburg, Virginia. Built in 1841, this Greek Revival style building is one of the least-altered examples of a 19th-century market hall. It now houses the Siege Museum commemorating the Siege of Petersburg. It was declared a National Historic Landmark in 1971. 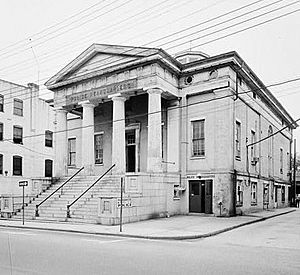 HABS photo of the Exchange Building

The Exchange Building is located in Petersburg's Old Town, at the northeast corner of West Bank Street and Exchange Avenue. It is a two-story, five bay by five bay, building with a hipped roof. It features a four-column Doric order portico in front, and five pilastered bays on the sides. At the building's center is a large circular domed room, the dome supported by piers and an entablature.

The Exchange was created in 1839 by a group of Petersburg businessmen as a meeting place where locally produced wares, predominantly tobacco and cotton, could be sold, and as a place to hold public auctions. The building was designed by an architect named Berrien from New York City, and was completed in 1841. It is a locally rare example of high-style Greek Revival architecture, and is one of the nation's least-altered examples of a market building. It now houses the Siege Museum, which displays artifacts and history relating to the American Civil War Siege of Petersburg.

All content from Kiddle encyclopedia articles (including the article images and facts) can be freely used under Attribution-ShareAlike license, unless stated otherwise. Cite this article:
Exchange Building (Petersburg, Virginia) Facts for Kids. Kiddle Encyclopedia.