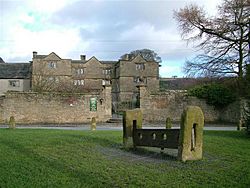 Eyam Hall is a Jacobean-style manor house in Eyam in Derbyshire.

The Wright family were landowners in Eyam although their family was historically based in Longstone. William Wright gave his land in Eyam to his second son Thomas who is credited with building the hall. Thomas's son John sold his father's house in Unthank and based his branch of the family in Eyam. The hall began life as a generous wedding present in 1671 for John Wright and his new wife Elizabeth. It has been in the Wright family for nine generations and is currently a family home and wedding venue that opens at different times of the year. The historic house is situated in picturesque part of Derbyshire and is an unspoilt example of a gritstone Jacobean manor house. The National Trust leased the hall for 5 years in March 2013, however, their lease has now ended and the Hall is back in the hands of the family full-time.

The Hall and garden are open at different times each year. There is a craft centre and restaurant adjacent to the hall. The shops and cafe are open all year round (except January) from 10–4.30 p.m. Eyam Hall is a Grade II* listed building.

All content from Kiddle encyclopedia articles (including the article images and facts) can be freely used under Attribution-ShareAlike license, unless stated otherwise. Cite this article:
Eyam Hall Facts for Kids. Kiddle Encyclopedia.