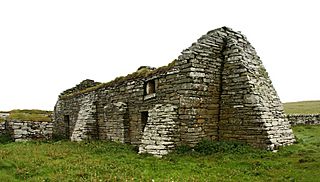 Eynhallow Church, view from the southeast. 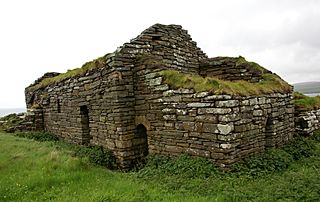 View from northwest. On the right the 12th century western porch.

Eynhallow Church is the ruin of a 12th-century monastery, located on Eynhallow in Orkney, Scotland. It is a scheduled monument.

The history of Eynhallow Church is mostly unknown. The church might have been part of a monastery, maybe of the Benedictine order. The church was built in the 12th century.

Because of the name of the isle it is likely that Eynhallow was an important religious centre. Eyin-Helha is Old Norse for Holy Isle.

In the Orkneyinga Saga the story is told of Olaf, son of Svein Asleifarson and ward of Kolbein Hruga; he was kidnapped from Eynhallow in 1155 and was most likely sent to Eynhallow to be educated by the monks.

Eynhallow Church was deserted before the reformation (circa 1560).

The church was converted into dwellings in the 16th century.

In 1851 the inhabitants of Eynhallow were transferred elsewhere and the church and other buildings were stripped of their roofs.

The ruin was consolidated by W.R. Lethaby in 1897.

All content from Kiddle encyclopedia articles (including the article images and facts) can be freely used under Attribution-ShareAlike license, unless stated otherwise. Cite this article:
Eynhallow Church Facts for Kids. Kiddle Encyclopedia.