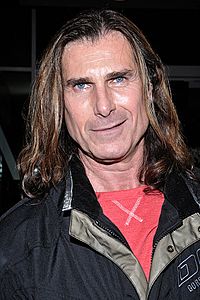 Fabio Lanzoni (born 15 March 1959), known simply as Fabio, is an Italian-American actor, fashion model and spokesperson. He is for known his appearances as spokesman for I Can't Believe It's Not Butter! and the American Cancer Society. He was also a romance novel cover model throughout the 1980s and 1990s. His acting credits include the movies Death Becomes Her (1992), Eddie (1996), Dude, Where's My Car? (2000) and Zoolander (2001).

Lanzoni was born in Milan, Lombardy. He became a citizen of the United States in 2016.

All content from Kiddle encyclopedia articles (including the article images and facts) can be freely used under Attribution-ShareAlike license, unless stated otherwise. Cite this article:
Fabio Lanzoni Facts for Kids. Kiddle Encyclopedia.