Fairbridge, Western Australia is a former farm school near Pinjarra in Southwest Western Australia. It is now used predominantly for education, school and community camps and tourism purposes.

On 15 April 1912, Kingsley Fairbridge and his wife Ruby Fairbridge arrived in Albany, Western Australia, from England and made their way to Pinjarra, arriving on 16 July that same year to establish the world's first Fairbridge Farm School. The school opened on 19 October 1912. Kingsley wanted to see "little children shedding the bondage of bitter circumstances and stretching their legs and minds amid the thousand interests of the farm."

From 1913 until 1982, Fairbridge Farm School assisted 3,580 children who came to Fairbridge under various child migration schemes. The school provided education in task-learning, husbandry, metal work and wood work. During World War II, Dutch refugee children evacuated from Indonesia were based at Fairbridge while waiting to be reunited with their families. During the same period, the site was also used as a training ground for the Women's Land Army, and Guildford Grammar School partially relocated there while their school was used as a hospital base. An airfield was constructed and operated from the school during the Second World War until the 1950s.

Members of the British Royal Family to have visited Fairbridge include the Duke and Duchess of York in 1927, the Queen Mother in 1964 and Prince Charles in 1979. 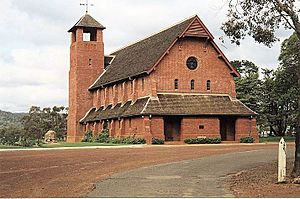 The chapel is the only building in Australia designed and construction overseen by noted British architect Sir Herbert Baker.

Described as "the architectural jewel in the crown" of Fairbridge Village, the chapel was built in 1930-31 by the Western Australian Government with construction funded by British interests.

All income raised from Fairbridge's tourism operations goes towards the organisation's charity work with young people.

The 30 hectare Village is run as a tourism training facility for young people and as a tourist destination providing visitors with accommodation, activities and historic surroundings. It is the only Fairbridge Farm School site remaining out of the eight that were originally built around the world.

Fairbridge offers historical tours and activities. It has a number of buildings which are used as conference and function venues and a coffee shop featuring local artworks. The village has an on-site coffee shop that is open seven days a week. Visitors to the village are able to stay for the day or overnight.

Fairbridge Village consists of 55 heritage listed buildings and 10 newer buildings on 30 hectares of land. The Village also has a chapel, dining hall, single and double storey cottages, training and sporting facilities. Accommodation can hold 370 people. There are 23 different self-contained cottages that sleep from 2 to 56 people.

All content from Kiddle encyclopedia articles (including the article images and facts) can be freely used under Attribution-ShareAlike license, unless stated otherwise. Cite this article:
Fairbridge, Western Australia Facts for Kids. Kiddle Encyclopedia.