Kids Encyclopedia Facts
This page is about the school in Western Australia. For the grammar school in Guildford, England, see Royal Grammar School, Guildford.

The school is a member of the Public Schools Association and the Independent Primary School Heads of Australia.

The Anglican grammar school traces its origins back to 1896 when it was established by Charles Harper. In 1900, the school moved from the Harper family home to its current site near the banks of the Swan River, approximately 15 km (9.3 mi) from the centre of the City of Perth on 80 hectares (198 acres) of property. The East Guildford campus consists of a senior school for Year Seven to Year Twelve, a preparatory school for kindergarten to Year Six, sporting grounds and boarding facilities for 150 students.

Guildford Grammar School traces its foundations to 1896 when Charles Harper, an influential Western Australian, established in the billiard room of his house (Woodbridge House) a school (under the guidance of Frank Bennett, the first headmaster) which wias to cater to the educational needs of his children and those from the surrounding district. Harper's vision was to create a school based on the English public school system, whilst also attempting to accommodate the different culture of the modern colonial society.

In 1900, the school moved to its current site. The school was originally called The Church of England Grammar School. Together with Christian Brothers College (Aquinas), The High School (Hale School) and The Alexander Scotch College (Scotch), the school established the Public Schools Association in 1905. Initially, the school only had 14 students, but in 1910, with over 100 students, it was taken over by the Trustees of the Church of England. Canon Percy Henn was appointed Headmaster.

In March 1942, the staff and students of the senior school were evacuated to Fairbridge Farm School near Pinjarra for 18 months as a precaution during World War II.

The Guildford Grammar School Foundation was established in 1974 to help guarantee the financial independence of the school and to develop its standing within the Western Australian education system. The board of the foundation aims to establish a large and self-perpetuating capital fund of $30 million. Currently, a portion of the income generated from the foundation's assets funds a bursaries and scholarships program.

The dedication of the school chapel to Saint Mary and Saint George took place on 25 March 1914. The dedication was the inspiration for the current coat of arms, which replaced the cross and coronet of the Harper family. The arms consist of the red cross of St George on a white shield below the three fleur de lys of St Mary against a dark blue field. "Go Forward", the school motto which succeeded the Harpers' Coelum ipsum petimus, appears in a scroll under the arms. 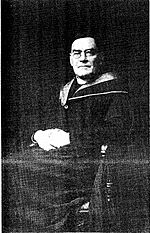 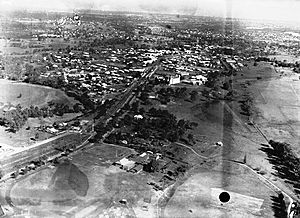 Guildford Grammar School is located on a 100-acre (40 ha) campus on the banks of the Swan River and stands among trees and lawns. The campus has a number of buildings and sporting facilities necessary for the day to day educational needs of the students. Some of these buildings are of historical significance - including the chapel, which is listed with the Heritage Council of Western Australia. Most of the buildings and sporting fields are named after significant people in the school's foundation and history.

In 2005, the school embarked on a major redevelopment project, named the One Campus Project, the first major project to be undertaken at the school in 15 years. This project includes the redevelopment of the school's playing fields and property bordering the Great Eastern Highway. The project is expected to cost in excess of $5.5 million and includes the construction of a new hockey pitch, a second football oval, 12 new acrylic surface tennis courts, a new sports pavilion and the reconstruction of Roberts Oval.

The Federation Gothic-styled school chapel (the Chapel of St Mary and St George), first suggested by headmaster Canon P.U. Henn (after whom Henn's House was named) and funded by Cecil Oliverson, after whom the school gymnasium is named. It is heritage listed and contains a large amount of English Oak wood. It currently houses a Bible (the Windsor Bible) gifted to the school by Queen Elizabeth II as a replacement for the Bible gifted by King George V which was destroyed in a fire in 1980.

Guildford offers a comprehensive extracurricular program for students. The school also has boarding facilities for students who live in rural areas of Western Australia as well as international students. The major components of the program are sports, music, the arts and cadets.

The cadet program at Guildford has a long and proud tradition, which dates back to 1904. The program is governed by the state and federal arms of the Australian Army Cadet Corps and is supported by the A SQD Tenth Light Horse.

Guildford is known to be one of the highest contributors to the national Tournament of the Minds competition which spans throughout Australasia. Guildford produced 15 teams composed of seven boys from Years 8 to 10 in 2007 and annually produces about 12 teams. Guildford has had success within this competition, regularly going into state finals and making the nationals in 2005, ranking fourth nationally in 2005 and being the top team for maths and engineering in Western Australia. 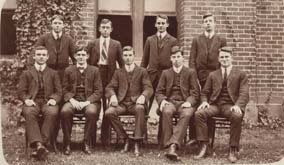 The school offers a range of academic pursuits for students, and also gives awards such as academic colours, subject awards and the dux award, which are given at an annual presentation night.

Guildford awards several scholarships based on academic merit to students, but under agreed PSA rules no member schools may award sports scholarships. To gain a scholarship a student must take the ACER (Australian Council for Educational Research) Co-operative Scholarship Examination, and also submit a portfolio. The shortlisted candidates attend an interview with the headmaster.

D'Arcy Slater Scholarship, which is awarded annually to a student entering Year 7 in memory of D'Arcy Slater, a student of the School who died in 1991. The student that receives the award must be a good all-rounder. This scholarship provides all tuition fees for the student.

Council Scholarships, the scholarship is an academic scholarship. Candidates must be under the age of 13 on the first day of January following the examination. This scholarship is tenable for between 25 and 50% of six years' worth of tuition fees.

Harry Campbell Pope Scholarships - Awarded to a number of students entering Year 7 of the Western Australian education system, following an examination and an interview with the Headmaster. These scholarships are worth 25% - 50% of tuition fees for six years.

Calder Crowther Scholarship - Awarded every two years to day student candidates from government schools in the vicinity of Guildford. It is worth 50% of tuition fees from years 7 to 12.

When Guildford opened in 1896, it was a day school, since its humble beginnings boarding was introduced for years 6–12, there are 100 boarders at the school. In 2007, international students were required to pay an extra $7683 in lieu of Government Subsidies and extra administration costs, which brought fees for international student at Guildford to $32,006.

All boarders reside in one of the boarding hall of residences with their house masters, house mothers and boarding assistants. Meals are served in the Dining Hall which is located in close proximity to the residences, and boarders have 12-hour access to medical services in the school's medical centre.

On weekends boarders will often do a variety of activities that staff and senior boys arrange. They also use the nearby Swan River as well as Adventure World and Subiaco Oval. Boarders in years 10, 11 and 12 will also participate in sport on a Saturday morning.

Guildford Grammar School has an eight-house system in both junior and senior school. Each house is named in honour of individuals who have had an association with the school and the Western Australian community including: Canon Percy Henn, an influential headmaster of the school, and James Stirling, a man much credited with the settlement of Western Australia.

The eight houses are Henn's, School, Stirling, Harper, Bennett, St. George's, Woodbridge and Freeth House with each house being divided into six mentor groups with a mentor group for each year (e.g. Stirling Year 10, Henns Year 8 and so on). Each mentor group is overseen by a mentor and Head of House. The members of each house are led by the House Captain (elected each year by the members of the house).

The eight houses compete against each other in three areas; sport (for the Cock House Cup), culture (for the Centenary Cup), and academic (for the John Gladstones' Cup). There is also the Council shield, which is awarded to the house adjudged to have been the most successful in the three competitions.

Students at Guildford have the opportunity to learn a music instrument during class time in the senior school. The school offers a variety of ensemble's for students to join including the senior choir and guitar ensemble. Music is compulsory for all students from Kindergarten to year 6, with the option of continuing to TEE music in year 12. Senior school students have the opportunity to learn under experienced musicians.

The Drama program at the school is based largely around the school production, recent productions include; My Fair Lady, Twelve Angry Men, Joseph and the Amazing Technicolour Dreamcoat, and Lord of the Flies. Heath Ledger, a prominent actor, attended Guildford Grammar School, where he had his first acting experiences, starring in a school production as Peter Pan at age 13.

Guildford Grammar School was a founding member of the Public Schools Association (PSA) in 1905, and the Junior School Heads Association of Australia (JSHAA) in 1968. Mr. Craig Wheatley (junior school headmaster), is the current (2007) president of the JSHAA, within both organisations the school competes in inter-school sports.

The Old Guildfordians Association or 'Old Boys' is an incorporated organisation established in 1905, which represents the former students of the school. The association exists to provide fellowship to former students, parents and staff and to support the school - especially in the provision of scholarships and financial assistance to families in need.

The Old Guildfordians Mundaring Hockey Club is an incorporated men’s and women’s hockey club based in the Guildford/Mundaring area. The club competes in various grades of the HockeyWA competition, from minkey (junior hockey) to senior’s hockey.

The club plays its home games at Lilac Hill Park, using the available facilities and clubrooms available. It is not a requirement of the club to have left school; in fact many of the clubs members haven't left school.

All content from Kiddle encyclopedia articles (including the article images and facts) can be freely used under Attribution-ShareAlike license, unless stated otherwise. Cite this article:
Guildford Grammar School Facts for Kids. Kiddle Encyclopedia.