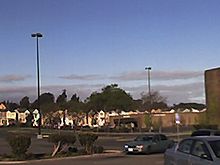 Hilltop Transit Village Phase I in the background, the adjacent parking lot on the mall side of Hilltop Mall road will be the greyfield for phase II.

Fairmede-Hilltop, more commonly known simply as Hilltop, is a neighborhood located in the northeastern area of Richmond, California.

It forms the bulk of the retail commercial sector which is anchored by Hilltop Mall Shopping Center. This mall, like many around the country, killed downtown after opening in the 1970s. The area has become a booming bedroom community since a high increase in new housing being built in the desirable neighborhood. This area is of interest due to its proximity to job centers in Oakland and San Francisco, its relative adjacency compared to other suburbs, and affordability. Many single family attached and detached homes as well as condos and apartment developments have been added, along with many new shops and strip malls since the late 1990s.

The Hilltop Retail Plaza once featured a 12-foot (3.7m) statue called "Sold" christened in 1978; however it mysteriously disappeared in 1988 leading to a 2 million dollar lawsuit.

All content from Kiddle encyclopedia articles (including the article images and facts) can be freely used under Attribution-ShareAlike license, unless stated otherwise. Cite this article:
Fairmede-Hilltop, Richmond, California Facts for Kids. Kiddle Encyclopedia.