The East Bay Science and Technology Center, formerly known as Hilltop Mall and The Shops At Hilltop, is a regional shopping center in the Hilltop neighborhood of Richmond, California. Hilltop is managed and co-owned by LBG Real Estate Companies, LLC. The anchor stores are Walmart, Macy's (closing April 2021), and 24 Hour Fitness. There are 2 vacant anchor stores that were once JCPenney and Sears.

Hilltop Mall opened in September 1976, built on land previously occupied by an oil storage tank farm owned by the Chevron Corporation. The mall was developed by A. Alfred Taubman, who also developed several other shopping malls in the East and South Bay Area, including Eastridge Center in San Jose, Stoneridge Shopping Center in Pleasanton, and Sunvalley Mall in Concord. Originally, it was anchored by red-tiled Capwell's, JCPenney and Macy's. Both Macy's and JCPenney originally had stores in downtown Richmond, but while Macy's had closed its downtown store a couple of years earlier, JCPenney kept its downtown store open for a year after Hilltop opened. Capwell's changed its name to Emporium-Capwell in 1979, before becoming simply The Emporium in 1990. Sears was added in 1990 in a newly built north wing addition, which was an expansion of this property.

Once opened, the mall attracted the major anchor stores from Richmond's downtown, with several major national chain stores closing downtown locations (although many acknowledge that the trend predated Hilltop due to economic and safety issues).

The mall remained largely unchanged until 1996, when the Emporium store closed following its merger with Federated, who owned Macy's. The store remained vacant until October 1998, when Macy's refurbished and relocated their existing store into the former Emporium space and closed the original Macy's store. The space would remain vacant until Walmart took over the space in Spring 2007.

The GM Pension Trust assumed full ownership of Hilltop Mall in 1998, retaining Taubman Centers as manager. In 2004, the GM Pension Trust sold a half-interest in a portfolio of shopping centers, including Hilltop, to The Mills Corporation, which also assumed management of the center. After several years of delay, Walmart opened on April 11, 2007 on the site Macy's vacated in 1998.

In July 2007, Simon Property Group purchased the entire Mills Corporation portfolio, including other Bay Area properties: Stoneridge Shopping Center in Pleasanton, California and Great Mall in Milpitas, California. On December 23, 2011, a shopping frenzy over retro Air Jordan shoes resulted in temporary closure of the mall after shots were fired. The mall later reopened, but sales of the shoe were banned for the day. Similar events occurred at the nearby Westfield Solano and the Bayfair Center malls in Fairfield and San Leandro, respectively.

In August 2012, Greg Maloney, president of Jones Lang LaSalle (JLL) Retail, was appointed receiver by the Contra Costa Superior Court to assume management of the property due to Simon's loan default. JLL retained Michael Piazzola as its managing receiver. The property was foreclosed upon in June 2013, and Jones Lang LaSalle was retained as the manager post-foreclosure.

On February 6, 2020, it was announced that Sears would be closing as part of the chain's plan to close dozens of stores nationwide. The store closed in April 2020.

On January 5, 2021, it was announced that that Macy's would be closing in April 2021 as part of a plan to close 46 stores nationwide. After Macy's closes, Walmart will be the only traditional anchor store left. 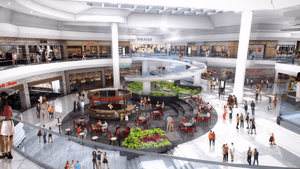 This is what The Shops of Hilltop could’ve looked like if the revitalization had gone forward.

In July 2017, LBG Real Estate Companies, LLC and Aviva Investors announced the purchase of The Shops at Hilltop property. The property went into foreclosure by Simon Property Group in 2012 and then proceeded to be put up for auction before it was bought by LBG and Aviva. LBG has begun the process of rebranding, redeveloping and upgrading both the interior and exterior of the mall structural buildings. Working with urban planners, LBG developed a strategy to transform the property during 2020 and beyond.

In September 2017, the shopping center rebranded as The Shops at Hilltop, representing a new vision to modernize the property. The renovated shopping center would have contained new dining, entertainment, office, and retail tenants. After redevelopment, The Shops at Hilltop would have hosted 99 Ranch Market as a new anchor tenant and a variety of dining options representing many different cuisines. There were also plans for personal care services and several entertainment options including a live theater as well as a mix of creative office tenants to the center connecting the shopping, dining, and cultural experiences to the workplace.

In addition to the Shops, LBG had created a master plan for the long-term, mixed-use redevelopment of the fully entitled 77-acre site which would have complemented the existing shopping center. This larger mixed-use development, named Hilltop by the Bay, referred to all the development occurring on the old Hilltop Mall Property. Hilltop by the Bay would have had over 3,500 housing units, as well as office, hotel, and entertainment uses.

The project never got off of the ground. COVID-19 was the final nail in the coffin and now the owners have dubbed the location, "The East Bay Science and Technology Center." There is a hope that somebody in that industry will want to set up shop here.

All content from Kiddle encyclopedia articles (including the article images and facts) can be freely used under Attribution-ShareAlike license, unless stated otherwise. Cite this article:
East Bay Science and Technology Center Facts for Kids. Kiddle Encyclopedia.