Fairview is a ghost town in Churchill County, Nevada, in the United States of America.

Fairview changed locations twice, once to move closer to the mines and mills in which the town's residents worked, and once because the town outgrew the narrow canyon in which the second town was sited. It is currently a ghost town. One of the few remnants of the old town is the bank vault from the first town site's bank; the vault can be seen from the nearby Austin-Lincoln Highway. 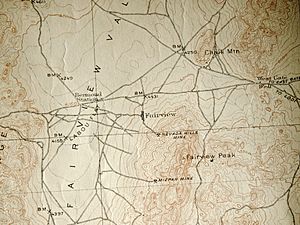 Fairview and Bermond Station Nevada in southeast Churchill County in 1910 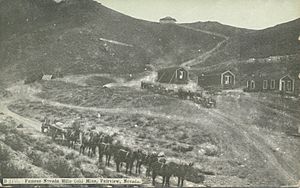 A stop for the Pony Express

A very large earthquake doublet occurred on December 16, 1954. The Dixie Valley/Fairview earthquakes occurred four minutes apart, each with a maximum Mercalli intensity of X (Extreme). The initial shock measured 7.3 Mw and the second shock measured 6.9 Mw. Damage to man-made structures was minimal because the region was sparsely populated at the time, but oblique-slip motion on a normal fault resulted in the appearance of large fault scarps.

All content from Kiddle encyclopedia articles (including the article images and facts) can be freely used under Attribution-ShareAlike license, unless stated otherwise. Cite this article:
Fairview, Nevada Facts for Kids. Kiddle Encyclopedia.