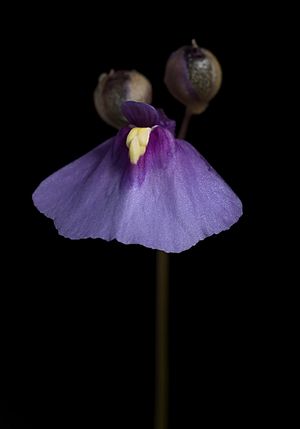 Utricularia dichotoma, commonly known as fairy aprons, is a variable, perennial species of terrestrial bladderwort. The specific epithet is Latin for "dividing into pairs" and refers to the double arrangement of flowers which this species often displays.

Utricularia dichotoma is a low stoloniferous herb with leaves variable in size and shape. According to Curtis, they can range from oval-spathulate and 2–4 mm long to narrow-lanceolate and up to 40 mm long. The former is more typical of plants growing in wet soil, the latter of plants growing fully submerged. Inflorescences are 5–30 cm high, terminating in one or two pairs of flowers, or whorls of three. Numerous underground stolons bearing bladders 1.5–2 mm in diameter.

This species has a large range and is native to New Caledonia, Australia (where it is present in all territories except Northern Territory and ACT) and New Zealand. Here it is present in the North Island, South Island and Stewart Island/Rakiura - this being the most southerly location at which a member of this genus occurs.

All content from Kiddle encyclopedia articles (including the article images and facts) can be freely used under Attribution-ShareAlike license, unless stated otherwise. Cite this article:
Fairy aprons Facts for Kids. Kiddle Encyclopedia.