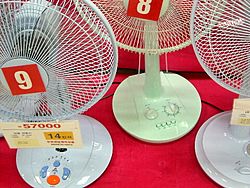 Electric fans in Korea have a "timer knob" that turns them off after a set number of minutes. This is seen as a life-saving function which is needed for bedtime use.

Fan death (Korean: 선풍기 사망설) is a widely-held belief in Korea that leaving an electric fan on overnight will kill a person. However, no people are known to have been killed by this.

Supposed cause of death

All content from Kiddle encyclopedia articles (including the article images and facts) can be freely used under Attribution-ShareAlike license, unless stated otherwise. Cite this article:
Fan death Facts for Kids. Kiddle Encyclopedia.