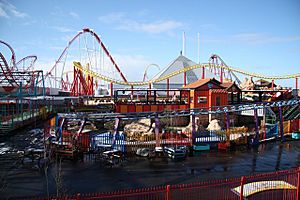 Fantasy Island is a family amusement park in Ingoldmells on the East Coast of England. Opened in 1993, it sits in a busy spread of holiday parks.

The park officially opened as Fantasy Island in 1995 and has been operated by Blue Anchor Leisure and Conduit Leisure.

On 5 August 2014, Fantasy Island announced that it had entered administration. The park continued to operate whilst the finances were reviewed. Duff & Phelps was appointed as Fantasy Island's administrator.

The Mellors Group acquired Fantasy Island in 2016 following the 2014 administration. Mellors Group planned to improve the attractions; including the re-installation of G-Force (a Fabbri made pendulum ride), which previously operated at the Park from 2002 to 2003.

G-Force left the park at the end of 2017 to allow the park to continue with its development plans and new attractions over the coming years.

At the beginning of the 2018 season Amazing Confusion was removed from the park after a 15 year operation and has been replaced with many rides such as Frisbee and Starflyer.

The seats once tilted as it launches up and produces a loud sound that can be heard from the Butlins Skegness resort.

Ice Mountain is a Reverchon Spinning coaster which arrived at the park in 2019. It has the lowest height out of the thrill rides. The ride takes place inside a transportable warehouse where it contains theming relating to snow and ice. The attraction has previously been used at Hyde Park's Winter Wonderland and is now set to replace the parks old Reverchon Spinning Coaster 'Fantasy Mouse.' The Fantasy mouse was removed at the end of the 2018 season to make space for the halloween attraction 'Psycho Vault and the Circus of Screams' during the parks Halloween Event. The ride is set to be better themed taking place mainly indoors and in the dark. Take note Ice Mountain is an exact replica of Fantasy Mouse, the only difference being that it is housed in the transportable wearhouse.

Magical Seaquarium opened in 1995 with Fantasy Island. The ride system was designed and built by WGH. The scenery was made by Attraction Projects International Ltd. The ride experience includes sitting in one of 15 bamboo themed boats and travel on an artificial river. While riding you will also experience beautifully themed underwater scenes which include animated pieces, UV lighting and an upbeat fast soundtrack unique to the ride.

Rhombus Rocket is a WGH Transportation powered coaster, first opening in 1995 with the rest of the park.

In 2007 it received a major refurbishment changing the train, station and track.

For the 2019 season it received another overhaul with brown supports and gold track and a new train design. The station also got re-themed with adding trellis and changing the colours around the station.

New for 2018, Magic is a Huss manufactured ride consisting of twelve four-seater gondolas which rotate at a high speed creating sudden twists and spins. The four arms which the gondolas are attached to raise up and down in a wave like motion.

New for 2020, manufactured by Zierer, it is a Starshape model originally opening as Bling at Blackpool Pleasure Beach. It was then relocated to Skyline Park as Sky Jet. In Late 2019 / early 2020 it was bought by Mellor's group and sent to Fantasy Island. However, due To COVID-19, the park decided to wait until 2021 to construct, due to the need of foundations being poured.

New for the 2020 Season, Firebowl is a teacups ride with large themed vehicles of giant pots. The ride formerly operated at Funland Hayling Island for almost two decades before relocating to Fantasy Island in 2020.

Standing at 70 meters (229 foot), Starflyer is a swing type ride serving as a temporary replacement to Turbulence while it has technical issues. This makes it the tallest ride in the park and is the same Starflyer from Hyde Park Winter Wonderland.

Opening in April 2004, Absolutely Insane was the UK's only Sky Sling. The ride was manufactured by S&S Power and launched riders to 240 ft into the air at speeds of up to 40 mph. In 2007, towards the end of the season, the ride was left standing, but not operating, until the ride was removed from the park in March 2010.

The Eye on the Coast

When The Eye on the Coast opened at the park in 2004, it was Europe's tallest ferris wheel, standing at a mammoth 196 feet. Consisting of 40 gondolas, the ride could hold a total of 240 passengers a time. Unfortunately, the ride was closed after just two years and was removed in 2006 as sold to the Mellors Group and now tours as the Mellors Wheel.

Topsey Turvey was a Top Spin type ride manufactured by Fabbri and was located where Sea Storm currently stands before it got removed from the park. It opened in the park's opening year in 1995. It was purchased from Pat Evans who had toured it during the 1994 season. It was sold to travelling showman Evan Moran in 1998, and was relocated to Pleasure Island as Terror Rack. Pleasure Island has since closed.

G-Force is a Giant Booster manufactured by Fabbri. It is the only one in the world and originally appeared in the 2002 and 2003 seasons before being traded for The Eye On The Coast, a Mondial ferris wheel. It returned in the 2016 season and was then confirmed to leave at the end of the 2017 season to make way for Air Maxx 360.

Fantasy Mouse is a Reverchon Spinning coaster which arrived at the park in 2000. It has the lowest height out of the thrill rides. In 2015, the ride underwent a repaint that saw the orange track with blue supports replaced with a purple and green colour scheme. For the 2016 season, the ride was moved to the west side of the park and was located by The Odyssey & Amazing Confusion.

In 2016, the original Fantasy Mouse came back to the park after the blue one was sold to the Crow Family. At the end of the 2018 season, the ride was dismantled to make place for the parks Halloween Attraction Fear Island Event.

The Beast was a Mondial Top Scan which operated at the park from 2001 until the 31st of March 2019. It has since been repainted White and Green and goes by the new name Top Buzz operating in Saudi Arabia. It was commonly referred to as the best Top Scan due to its long cycles, sometimes giving 11 minute long (manual operation) rides!

Seating 4 Passengers, and reaching a height of 24 metres, passengers can experience up to 4.65g's. Looping in random projectories all the time, experience negative forces.

It was a Loop Fighter built by Italian Manufacturer Technical Park.

Opening in 2018, Frisbee was a HUSS Frisbee originally sent from Dubai. In 2020 Fantasy Island announced that it would not be returning for the 2020 season and was replaced by Firebowl.

The Hula kula was located next to the volcano during the early years of the park.

Amazing Confusion was one of only two Mondial Ultra Max rides to ever operate in the world.

As of recently Amazing Confusion can be found defunct next to the Notts County F.C. Football Club in Nottingham.

Star flyer has been recently added as a temporary ride in the park where Amazing Confusion used to be.

Whilst entry to the Park is free, customers either pay per ride using a Fantasy iCard or purchase an unlimited ride wristband. The pay-per-ride option uses an iCard System, this option allows credit to be added to the iCard to be able to use the rides in the Park. Rides are priced depending on the ride type.

There are plenty of events throughout the season from Easter, character meet and greets, Beach Party, discount promotional days, Fear Island at Halloween and firework displays.

Fantasy Island is also home to Europe's Largest 7 Day Market and the biggest Family Entertainment Centre on the East Coast.

All content from Kiddle encyclopedia articles (including the article images and facts) can be freely used under Attribution-ShareAlike license, unless stated otherwise. Cite this article:
Fantasy Island (UK amusement park) Facts for Kids. Kiddle Encyclopedia.