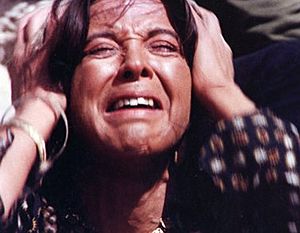 Taidi in The Journey of the Stone

Farzaneh Taidi (Persian: فرزانه تأییدی‎; 1945 – 25 March 2020) was an Iranian actress. She was born in Tehran. She appeared in a number of Persian language movies starting in the 1970s. Her movie credits include Hell + Me, The Eighth Day of the Week and The Journey of the Stone. She also appeared in Not Without My Daughter (1991).

All content from Kiddle encyclopedia articles (including the article images and facts) can be freely used under Attribution-ShareAlike license, unless stated otherwise. Cite this article:
Farzaneh Taidi Facts for Kids. Kiddle Encyclopedia.