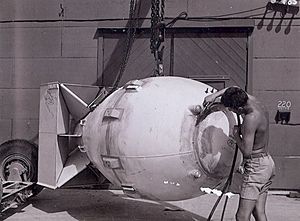 Fat Man is the name of the third ever atomic bomb made from plutonium and the second to be used in war. It was dropped over the Japanese island of Nagasaki on August 9, 1945.

All content from Kiddle encyclopedia articles (including the article images and facts) can be freely used under Attribution-ShareAlike license, unless stated otherwise. Cite this article:
Fat Man Facts for Kids. Kiddle Encyclopedia.