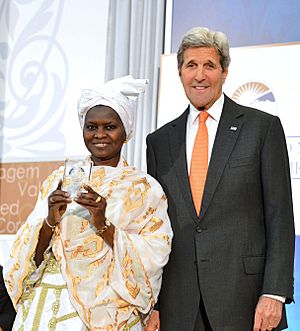 Fatimata M’baye and U.S. Secretary of State John Kerry in 2016

Fatimata M’baye (Arabic: فاطمتا أمباي ) is a Mauritanian lawyer and human rights activist. She started the Mauritanian Association for Human Rights. In 2016 she received an International Women of Courage Award.

M'baye studied law and economics at Nouakchott University from 1981 to 1985. She became the first woman lawyer in Mauritania.

M'baye takes the most difficult legal cases. She represented clients accused of apostasy. She also worked for a “committee of widows” whose husbands were murdered. M'baye helped write the 2007 anti-slavery law. She got convictions for child exploitation and slavery. She was in prison many times, and received many threats to her life.

All content from Kiddle encyclopedia articles (including the article images and facts) can be freely used under Attribution-ShareAlike license, unless stated otherwise. Cite this article:
Fatimata M’baye Facts for Kids. Kiddle Encyclopedia.