Faywood Hot Springs is a resort in Grant County, New Mexico, United States. It is located 2 miles (3.2 km) northeast of US 180 and .5 miles (0.80 km) west of NM 61, just south of the City of Rocks State Park. The hot springs have been visited since the time of the Mimbres culture. It was a successful resort in the late 19th century and early 20th century. In 1952, the establishment was demolished and became a ghost town. The land was purchased in 1993 and developed into a hot springs resort again.

The hot springs are located at an altitude of 5,782 feet (1,762 m) and sheltered from heavy winds by nearby mountains. In 1903 and 1904, it was reported that the springs flowed through a cone of hardened minerals (.5 miles (0.80 km) in circumference and 40 40 feet (12 m) high) at the rate of 6,000 gallons per hour. The water was analyzed and found to be alkaline, with 39.59 grains of solids per gallon. It contains soda, and to a lesser extent, alumina, carbonates, chlorides, iron, magnesium, potash, silica, and sulfates. With a temperature of 142 °F (61 °C) degrees, it was described as one of the Southwest's hottest spring water. In 2001, the temperature of the source spring water was measured at 129 °F (54 °C) degrees.

There is evidence that people of the Mimbres culture used the springs. Mortar holes were found that were used for grinding food. During construction in 1896, archaeological evidence of prehistoric stone and flint tools, pottery, and copper spoons were found near the spring.

Apaches and other Native Americans visited the site. Also during the 1896 construction, human bones were found in the spring. They were believed to be those of an Apache man who was injured near the springs during an intercepted raid of a settler's family and thrown into the hot spring by a cavalry soldier, who was later acquitted but court-martialed. Spanish explorers, miners, and buffalo hunters also came to the hot springs.

The site was first called Ojo Toro (bull spring) by Captain Martinez when he stopped at the site and saw bulls watering at the springs in 1785. It was called Ojo Cliente (hot spring) in 1851 by US Boundary Commission's John Bartlett. 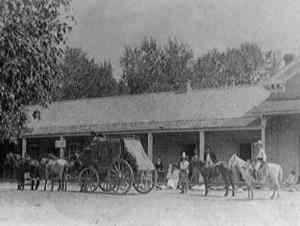 In 1859, a hotel and bath house called Hotel of Accommodation was built by former El Paso, Texas sheriffs William Watts and A. Kuhne. Grant County was founded in 1868. The property was acquired by Colonel Richard Hudson, the county's first sheriff, and by 1878 was named Mimbres Hot Springs. The following year it was renamed Hudson Hot Springs and had a post office of that name until 1881. That year, Hudson began construction on a hotel that was completed in 1884. In 1890, the hotel burned down.

Andrew Graham owned the property in 1894 and by 1896 completed the 60-room Casa del Consuelo (House of Delight), which was considered the "fanciest hotel in New Mexico Territory" according to Robert Hixson Julyan. By 1897 there were 35 residents of Hudson Hot Springs. Visitors and mail arrived at the Atchison, Topeka and Santa Fe Railway's Hudson station, which was five miles from the site. There were limited public school and church services for residents. The area economy was supported by agriculture, livestock, and tourism. The minerals in the hot springs were said to help heal rheumatic, stomach, skin, blood and kidney diseases.

By 1900, Faywood Hot Springs was developed by three men: J.C. Fay, William Lockwood, and T.C. McDermott. Fay and Lockwood's names were combined to create the "Faywood" name. McDermott was the only partner to remain at the resort. The Faywood Hot Springs Hotel, which could serve up to 125 guests, was one-storied, with a three-sided courtyard and an almost 900 feet (270 m) long veranda. It had a large dining room, parlors, a writing room, barber shop, gun room, and a billiard room. Spring water was cooled and piped into the hotel rooms and bath houses. Guest rooms had outdoor entrances and large windows, hot and cold water, and many rooms could be heated by piped water from the hot springs. In 1904, in a report by the Governor of New Mexico to the Secretary of the Interior, Faywood was identified as one of the more popular hot springs sites with "excellent hotel accommodations." McDermott lived on the property until 1947, when he died at the age of 97. The resort was popular during World War I, but patronage declined after that. In 1952, the hotel was demolished, except for the adobe foundation.

After the hotel was razed, the land was owned by the Chino Mines. In 1966 it was owned by Kennecott Cooper, who later sold it to the Phelps Dodge Company. They held it until 1993.

The hot springs have been used commercially since 1993. In 1996 the hot springs property was owned by Elon Yurwit and Wanda Fuselier.

The private resort is open year-round. The temperature of public pools range from 95 to 110 °F (35 to 43 °C) degrees. There are swimsuit-required and swimsuit-optional public pools. There are also private pools with individual temperature controls. Visitors can camp at tent and recreational vehicle sites or stay in one-bedroom cabins.

All content from Kiddle encyclopedia articles (including the article images and facts) can be freely used under Attribution-ShareAlike license, unless stated otherwise. Cite this article:
Faywood Hot Springs Facts for Kids. Kiddle Encyclopedia.