The February 30 or 30 February doesn't exist in both Julian and Gregorian calendar. The month February has only 28 days (29 days in a leap year).

February 30 was a real date in few calendars.

Johannes de Sacrobosco claimed that from 45 BC to 8 BC, the February had 30 days in leap year. In 8 BC, Augustus added 31 days in August. It made the February shorter. 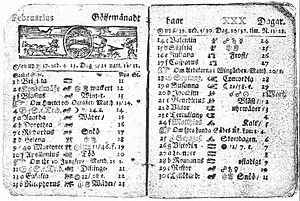 Many sources claimed that from 1929 to 1940, Soviet union used a new calendar. It had 5-6 weeks and 30 days each month. Other 5 days were holidays in the calendar, just like the French Republican Calendar.

According to Appendix D to The Lord of the Rings, this calendar has 12 months and 360 days. The month the Hobbits call Solmath actually says February in the text. The month shows 30 days.

All content from Kiddle encyclopedia articles (including the article images and facts) can be freely used under Attribution-ShareAlike license, unless stated otherwise. Cite this article:
February 30 Facts for Kids. Kiddle Encyclopedia.