Luis Felipe Crespo Centeno (Born in Guayaquil, Ecuador) also known as Loco Crespo, is an Ecuadorian artist, actor and comedian, who has participated in several Ecuadorian films and television programs, and also unfolds as a recognized YouTuber in Ecuador.

Luis Felipe Crespo Centeno was born in Guayaquil, Ecuador, his parents are from Guayaquil and he also have Cuenca grandparents. He studied at “Escuela de bellas artes Juan Jose Plaza”, where he graduated as a bachelor in Plastic arts, his specialization painting. He have a degree as graphic designer and also obtained the title of technologist in infographics.

Since 2012, he was part of the Teatro Fantoche a group of Hugo Avilés, along with Katty García, Adrián Avilés, Fabricio Mantilla, Luis Fernando Puig, Paco Barcia and Álex Vizuete, in which he specialized in impro, and had a season of Impro Match at Casa Fantoche, in 2015, conforming the team of the “Iguanayacos” in front of “Crosfiteros Arrepentidos”, “Los Brocolitos psicodélicos”, “Tiwinza N.U.P.A.” and “Perico & Coco”.

In 2014 was part of the children's play Juan El Imaginario, along with Marcelo Gálvez, Danilo Esteves, Alexis Egas and Santiago Vázquez in the Teatro del Ángel.

In 2016 he made screenplays with Jorge Toledo for several works.

In 2015 He designed the statuette “Iguana Dorada” for the first edition of the Guayaquil International Film Festival.

In 2016 appeared in the film Entre Sombras: Averno, the director Xavier Bustamante, along with Juan Pablo Asanza, Daniela Vallejo, Marlon Pantaleon and Montse Serra, where he played a reporter of “Cronica Roja”, in addition to being in charge of the making-of, and performing several performances as extra.

In 2018 starred with Paola Olaya the horror short film Clown, of the director Maxime Pailloux, where he played a clown. 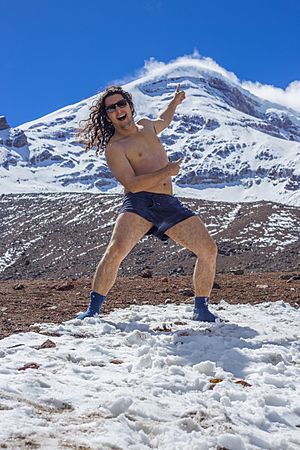 Loco Crespo in 2018, posing in underwear on the slopes of Chimborazo.

On August 12, 2009 he created his YouTube channel with the same name, Felipe Crespo, in which he post videos of short films with funny stories and videos of animation that he carried out in his place of studies, so that they can see his family and friends , however, almost no content was raised.

In 2011 It was part of a project created by the general producer Irving Zambrano, directed by Salvatore Fonseca and produced by Calé Rodriguez for YouTube, called INperfectos, in which Crespo interpreted Andy, a scared and useless young man who is left alone at home together His brother Manuel, played by Douglas Armijos, after his parents won the lottery and went on a long honeymoon around the world, leaving them with some money so they can subsist, living with several of his friends, such as Albino, interpreted by Suager Segura, who ironically is Afrodescendant and only appears when it suits, Nathy, la aniñada, interpreted by Nathaly Troya, who has a prima “montubia” called “Ceci la chonera”, interpreted by Saira Aráuz, and an attractive friend named Pamela, Played by Andrea Alvear, who has a secret that frightens his suitors, in addition to Andy's girlfriend, called Roxana, played by Andrea Ojeda, who is watched by her mother Viviana, played by Carolina Ossa, who recorded a documentary of life of your daughter.

In 2014 he recorded for the JoviVlogs channel of his friend José Villacís, where they conducted cynical criticism of society, local television or reggaeton music, in which he had appearances in these videos for one year, so people asked him to create a his own channel. In August of that same year was held in “La Casa de la Cultura de Guayaquil”, the Youtubizados Awards, where Crespo won in the category of Best Variety for the content of his YouTube channel, under the criterion of the jury formed by Cristian Cortez, screenwriter of El Combo Amarillo, and Alejandro Lalelo, creative director and actor of Enchufe.tv.

At the beginning of 2015 began to make consecutive content for its channel after a friend, the filmmaker Luis Avilés, prompted him to revive it in the format of street interviews with media and controversial issues or challenges with humor to raise money and buy Food to those who need it. Originally Crespo did not call much attention to make such content because he feared to appear on television, but ended up liking him after being in the field, until finally in 2016, Luis Avilés dissociated himself as director of content of the channel of Crespo to devote himself to his Minuto final cinematographic project.

Crespo is known by people like “Loco Crespo” because of the videos he performs. Ricardo Ponce is one of his best friends and his cameraman at the time of making the videos, while Felipe is in charge of editing his own videos because he knows more the history of the captured in camera and gives him his peculiar style. Its content predominates interviews in social events, adolescents in schools, touring several cities of Ecuador, and through a satirical humor generates conflict with certain paradigms of Ecuadorian culture.

Between 2017 and 2018, he was part of the cast of eleOeleTV (LOL), directed by Jorge Toledo in association with the production company Play On by Nicolás Lapentti, together with Katherine Escobar, Marián Sabaté, Vicente Romero, Jaime Roca, David Coloma, Carolina Dávila, Pedro Gonzales, among Other.

All content from Kiddle encyclopedia articles (including the article images and facts) can be freely used under Attribution-ShareAlike license, unless stated otherwise. Cite this article:
Felipe Crespo Facts for Kids. Kiddle Encyclopedia.