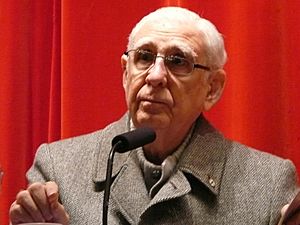 Fernando Cardenal Martínez (26 January 1934 – 20 February 2016) was a Nicaraguan Jesuit and liberation theologian. He served as Minister of Education from 1984 to 1990, during the Sandinista era. His brother, poet Ernesto Cardenal, also a Catholic priest, served as Minister of Culture from 1979 to 1987. He was born in Granada, Nicaragua.

Cardenal died in Managua from heart failure on 20 February 2016. He was aged 82.

All content from Kiddle encyclopedia articles (including the article images and facts) can be freely used under Attribution-ShareAlike license, unless stated otherwise. Cite this article:
Fernando Cardenal Facts for Kids. Kiddle Encyclopedia.