Kids Encyclopedia Facts
This page is about a species of fig. For the banana cultivar known as 'Fig Banana', see Lady Finger Banana.

Ficus pleurocarpa, commonly known as the banana fig, karpe fig or gabi fig, is a fig that is endemic to the wet tropical rainforests of northeastern Queensland, Australia. It has characteristic ribbed orange and red cylindrical syconia. It begins life as a hemiepiphyte, later becoming a tree up to 25 m (82 ft) tall. F. pleurocarpa is one of the few figs known to be pollinated by more than one species of fig wasp.

Ficus pleurocarpa was described by German-Australian botanist Ferdinand von Mueller in 1874 in Fragmenta Phytographiae Australiae. Its specific epithet is derived from Ancient Greek pleuro-, ribbed, and -carpus, fruit, or flesh of the fruit, hence "ribbed fruit". This is derived from the 5–10 ribs that run along the length of the fruit.

With over 750 species, Ficus is one of the largest angiosperm genera. On the basis of morphology, English botanist E. J. H. Corner divided the genus into four subgenera which were later expanded to six. In this classification, F. pleurocarpa was placed in subseries Hesperidiiformes, series Malvanthereae, section Malvanthera of the subgenus Urostigma. In his reclassification of the Australian Malvanthera, Dixon altered the delimitations of the series within the section, but left this species in series Hesperidiiformes.

Based on DNA sequences from the nuclear ribosomal internal and external transcribed spacers, Nina Rønsted and colleagues rejected previous subdivisions of the Malvanthera. Instead, they divided section Malvanthera into three subsections—Malvantherae, Platypodeae and Hesperidiiformes. In this system, F. pleurocarpa is in the new subsection Malvantherae.

Ficus pleurocarpa is an Australian endemic. It is found in north-east Queensland, from Cape Tribulation south to the Atherton Tableland. It grows in lowland and upland wet tropical rainforests from sea level up to 1,000 m (3,300 ft) above sea level. 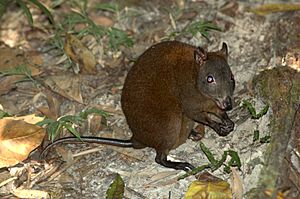 During a season of fruit scarcity, Ficus pleurocarpa sustained the musky rat-kangaroo population at one particular research site.

Figs are sometimes considered to be potential keystone species in communities of fruit-eating animals; their asynchronous fruiting patterns may cause them to be important fruit sources when other food sources are scarce. Ficus pleurocarpa was the most largest contributor of fruit biomass in the forest canopy during periods of fruit scarcity, and was ranked as the species that made the second most important contribution to the frugivore community, although the authors of the study were unwilling to call it a keystone species. However, during a season of fruit scarcity, F. pleurocarpa sustained the musky rat-kangaroo population at one particular research site

The fruit of F. pleurocarpa fruit are relatively small and become soft when ripe. This makes them accessible to the entire fruit-eating community. However, most F. pleurocarpa figs are available in the canopy—only a small proportion of the fruit crop falls to the forest floor.

The figs are edible fresh or dried and are described as "tasty at the fully ripe red stage".

All content from Kiddle encyclopedia articles (including the article images and facts) can be freely used under Attribution-ShareAlike license, unless stated otherwise. Cite this article:
Ficus pleurocarpa Facts for Kids. Kiddle Encyclopedia.