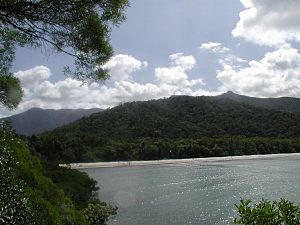 View from Cape Tribulation on the sand beach

There is a sealed road to the area from the south from the Daintree River Ferry. To the north there is a four wheel drive unsealed road, called the Bloomfield Track. This goes to the Bloomfield River, Wujal Wujal, Bloomfield Falls and Cooktown. It is often closed during the wet season (Feb-Apr).

Tribulation means trouble and great suffering. Cape Tribulation was named by British explorer Lt. James Cook on 10 June 1770 after his ship ran into a coral reef near the headland; "...because here began all our Troubles..."

Cape Tribulation is in a rainforest and it gets a lot of rain. In 2006, the rainfall recorded was over 5.7 metres.

Most people visit the area during the dry season between July and November. There are four main resorts to stay in as well as several smaller bed and breakfast places. The town has two small supermarkets, two ATMs, one takeaway food outlet and five restaurants. During the wet season marine stingers are common so people swim in the many waterholes. There are crocodiles in the creeks.

The Great Barrier Reef is very close to the coast, only 19 km (12 mi) due east. There are two boats that take visitors to the reef. Other activities available are guided night walks, 4 wheel drive tours, horseriding, kayaking, jungle surfing, tropical fruit tasting and crocodile cruises.

All content from Kiddle encyclopedia articles (including the article images and facts) can be freely used under Attribution-ShareAlike license, unless stated otherwise. Cite this article:
Cape Tribulation Facts for Kids. Kiddle Encyclopedia.