Cape Tribulation is a headland and locality in northern Queensland, Australia 110 km (68 mi) north of Cairns. It is located within the Daintree National Park and the Wet Tropics World Heritage area. It is within the local government area of Shire of Douglas (between 2008 and 2013, it was within the Cairns Region). At the 2011 census, Cape Tribulation had a population of 330.

The locality contains a small number of bed and breakfast eco lodges, tourism resorts and backpacker hostels. A few very rare plants can be found on Cape Tribulation.

Cape Tribulation was named by British navigator Lieutenant James Cook on 10 June 1770 (log date) after his ship scraped a reef north east of the cape, whilst passing over it, at 6pm. Cook steered away from the coast into deeper water but at 10.30pm the ship ran aground, on what is now named Endeavour Reef. The ship stuck fast and was badly damaged, desperate measures being needed to prevent it foundering until it was refloated the next day. Cook recorded "...the north point [was named] Cape Tribulation because here begun all our troubles".

In the 1930s some European settlers started arriving in Cape Tribulation, but they found the rainforest environment a difficult place to get established. Various ventures such as fruit and vegetable farming, fishing, cattle, and timber cutting were started and abandoned over the years, and having weekly barges as the only transport in and out was another handicap. In the 1960s a rough track was bulldozed and the first vehicle access created, although the road remained a four-wheel drive track until the early 1990s. In 2002, the road was finally sealed all the way to Cape Tribulation and in early 2011 the last bridge was built creating year round all weather access to Cape Tribulation for the first time.

In 1983, Cape Tribulation became widely known because of the blockade on the Bloomfield Track. Local government had decided to bulldoze a road through the rainforest north of Cape Tribulation to complete the coastal road to Cooktown. Protesters tried to stop the bulldozers and occupied trees to prevent their destruction. While wild scenes with a large police and media presence ensued at the southern end, the road was completed in three short weeks as the road builders approached from northern end and flanked the protestors. By now the state and federal governments had started to realise the value of this ancient rainforest and despite protests from the local council the forests surrounding Cape Tribulation were given World Heritage Listing in 1988. 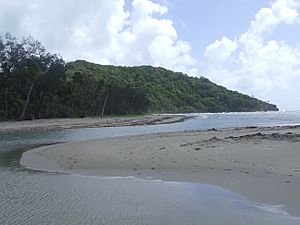 The Dubuji Boardwalk leads to the beach. 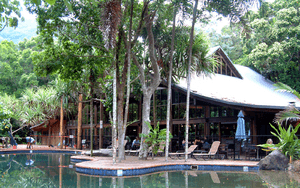 From the mid-1980s the first backpackers hostels started getting built, and in the 1990s some more resorts for the more upmarket tourists. Nowadays there are also several small owner operated Bed and Breakfast eco lodges hidden away in the rainforest. Compared to a lot of famous tourist destinations along coastal Queensland, Cape Tribulation is still an off the beaten track destination.

Most people visit the area during the dry season between July and November. During the wet season marine stingers are prevalent causing locals and visitors to swim in the many creeks that are not infested with crocodiles. There are four main resorts in the area catering to backpackers and more upmarket tourists, and some unique rainforest bed and breakfasts. 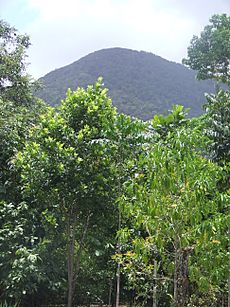 A sealed road provides access to the area from the south via the Daintree River Ferry and with the completion of the Cooper Creek bridge access is now year round all weather. North from Cape Tribulation Beach House, a four-wheel drive unsealed road, known as the Bloomfield Track, continues to the Bloomfield River, Wujal Wujal, Bloomfield Falls and Cooktown and is often closed during the wet season (February to April). 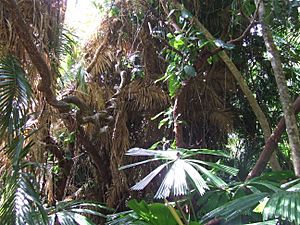 The Great Barrier Reef is some 19 km (12 mi) due east; there is a boat charter that leaves from the beach at Cape Tribulation. Other activities available are 4WD tours, horse-riding, kayaking, jungle surfing and crocodile cruises.

The area has a number of walking tracks ranging from easy to difficult. The Dubuji Boardwalk is a walking trail from the main highway to the beach that has toilet and picnic facilities. It leads mainly through swampland with many mangroves. A characteristic of this walk are the tree trunks the path is built around. The Mount Sorrow ridge trail is a seven-hour walk which leads to a lookout with expansive views.

All content from Kiddle encyclopedia articles (including the article images and facts) can be freely used under Attribution-ShareAlike license, unless stated otherwise. Cite this article:
Cape Tribulation, Queensland Facts for Kids. Kiddle Encyclopedia.