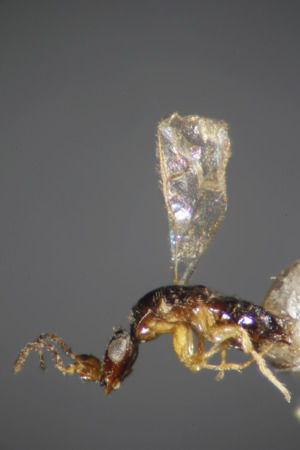 Ficus septica (called hauli tree in the Philippines, 稜果榕 in China and Taiwan) is a shrub or tree of the family Moraceae living at low altitudes from northeast India to north Australia (Queensland), and throughout Malesia. It lives on the edge of the vegetation, often in degraded environments. The seeds of this species are dispersed by numerous species, including fruit bats (Megachiroptera) when present.

Tree or shrub up to 25 meters. The latex of F. septica is characteristically yellow. Leaves and petioles are both glabrous. Leaves are symmetric, elliptic to oblong. Figs grow often in pairs but can be solitary or in groups of up to four. Figs are depressed-globose to ellipsoid, the apex is flat or concave. Seven to twelve ribs towards to ostiole. At maturity, whitish to yellowish dots appear on the fig. The individuals from Philippines have their stems covered by short hairs while those found in Taiwan are glabrous.

Ficus septica trees live up to 1800m in montane forests or secondary growth environments. It can be seen often along rivers. In Taiwan, at the northern limit of its distribution, F. septica lives up to 500m in secondary growths and along roads and coastlines.

The figs of Ficus septica have been reported to be eaten by 22 animal species and among them 14 are bats:

All content from Kiddle encyclopedia articles (including the article images and facts) can be freely used under Attribution-ShareAlike license, unless stated otherwise. Cite this article:
Ficus septica Facts for Kids. Kiddle Encyclopedia.