Defender of the Faith facts for kids 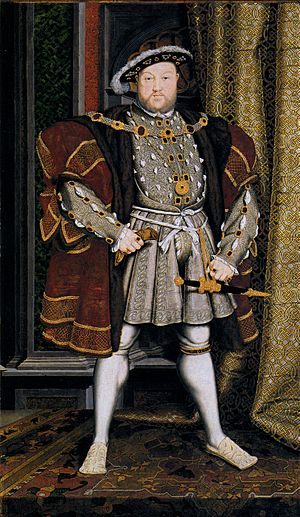 Defender of the Faith (Latin: Fidei Defensor) is a title belonging to the leader of the Church of England. It was originally conferred upon King Henry VIII of England by Pope Leo X on 11 October 1521 as a reward for the king having written a pamphlet in defense of the sacraments against Martin Luther (Declaration of the Seven Sacraments Against Martin Luther). King James V of Scotland received a similar title from Pope Paul III.

When Henry broke with the Roman Catholic Church, Pope Paul III took the title away. It was returned to the king by Parliament in 1544. The abbreviation Fid. Def. or the letters F.D. have appeared on British coinage from the time of George I. Defender of the Faith is a title still carried by British monarchs.

All content from Kiddle encyclopedia articles (including the article images and facts) can be freely used under Attribution-ShareAlike license, unless stated otherwise. Cite this article:
Defender of the Faith Facts for Kids. Kiddle Encyclopedia.