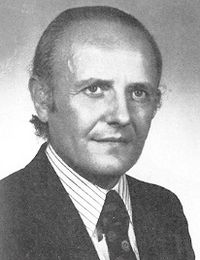 Filippo Maria Pandolfi (born 1 November 1927) is a former Italian politician, minister, and European commissioner. He was born in Bergamo, Italy.

Pandolfi was a member of the Christian Democracy party. He was elected to the Italian parliament in 1968, heading the list in electoral district of Brescia–Bergamo in 1976, 1979, 1983, and 1987.

Pandolfi was finance undersecretary in the Aldo Moro government from 1974 to 1976. In 1976 he became Minister of Finance, in 1978 Minister of the Treasury, then from 1980 to 1983 Minister for Industry and Trade, and finally from 1983 to 1988 Minister of Agriculture and Forestry.

From 6 January 1989 to 5 January 1993 he was the European Commissioner in the Delors Commission, having portfolio for Research and Development.

All content from Kiddle encyclopedia articles (including the article images and facts) can be freely used under Attribution-ShareAlike license, unless stated otherwise. Cite this article:
Filippo Maria Pandolfi Facts for Kids. Kiddle Encyclopedia.