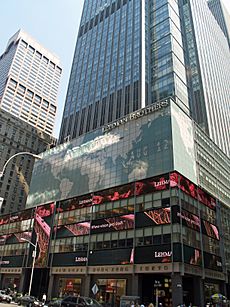 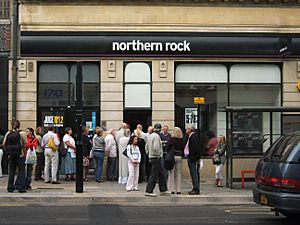 The financial crisis of 2007–2008 was a major financial crisis, the worst of its kind since the Great Depression. It became prominently visible in September 2008 with the failure, merger, or conservatorship of several large United States-based financial firms. The underlying causes leading to the crisis had been reported in business journals for many months before September, with commentary about the financial stability of leading U.S. and European investment banks, insurance firms, and mortgage banks consequent to the subprime mortgage crisis.

There are many reasons why economists think the crisis happened. Most economists believe that it started in the United States. From 1997 until 2006, people bought expensive houses, even though they did not have enough money for it. Since the money had come from other countries, it was easy to have good credit. People used this credit for expensive home loans. This created an economic bubble which caused the houses' prices to raise. Because they had a lot of money, the loaning companies made it easier to get a loan, even if the borrower didn't have a good credit history. These loans are known as subprime loans.

During this time, many homeowners refinanced their homes. This caused their mortgage to change, giving them lower interest. After they refinanced, homeowners could take out another mortgage to use as spending money. The loaning companies changed their loans so that they had low interest at first, which would increase later. This is known as adjustable rate mortgage. The companies did this to try to convince more people to take loans. Many people with subprime loans also took these adjustable rate mortgages, hoping that the good price of housing would help them refinance later.

However, the housing companies built too many houses. This caused the price of housing to decrease beginning in the summer of 2006. The value of many homes dropped below the value of the remaining mortgage debt, so the owners were unable to sell and move away. This is called negative equity. About 8.8 million homeowners in the U.S. had zero or negative equity by March 2008. This caused the number of foreclosures on homes to increase, meaning that many people lost their homes. During 2007, almost 1.3 million U.S. homes could be foreclosed on. The number of houses for sale continued to increase, which made the prices decrease. The homeowners with subprime loans left their houses with less value than they had when they were bought, which meant that the loans were worth more money than the house. The loaning companies were not able to make money from these houses.

The collapse of the housing bubble caused the value of investments to fall. The companies that had invested in subprime loans lost a total of about $512 billion. Citigroup and Merrill Lynch were two of the companies which lost the most money. More than half of the money lost, $260 billion, was lost by American firms.