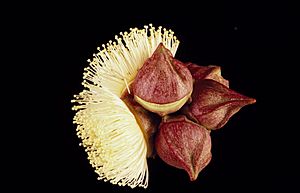 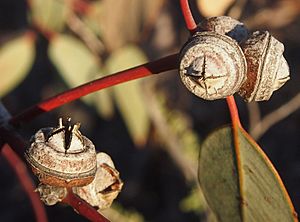 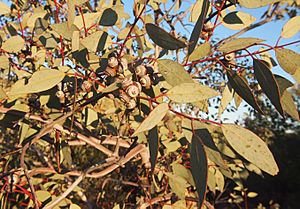 Eucalyptus sessilis, commonly known as Finke River mallee, red bud mallee or river mallee, is a species of mallee that is native to the Northern Territory and central areas along the border of Western Australia. It has smooth bark, sometimes with ribbon of old bark near the base, lance-shaped to egg-shaped or elliptical adult leaves, flower buds in groups of seven, creamy yellow flowers and hemispherical fruit.

Finke River mallee was first formally described in 1920 by the botanist Joseph Maiden as Eucalyptus pachyphylla var. sessilis in his book A Critical Revision of the Genus Eucalyptus. The type specimen was collected by Ernest Giles in 1872 at Glen of Palms in the western Macdonnell Range, to the south of Hermannsburg In 1934, William Blakely raised the subspecies to species status as E. sessilis in his book A Key to the Eucalypts. A common name for this tree is the Finke River (or River) mallee. The specific epithet (sessilis) refers to the sessile buds and fruit.

Eucalyptus sessilis grows in open shrubland on stony slopes. It is found in the central Northern Territory in an area centred around Alice Springs with a scattered distribution that extends west over the Western Australian border into the Goldfields-Esperance region. It is most often found on rocky ranges particularly the MacDonnell Ranges and Central Ranges in the Northern Territory and the Rawlinson Ranges and Walter James Range in Western Australia. It is also scattered through the Finke River basin, Great Sandy Desert and Burt Plains.

It is both drought and frost resistant, attracts birds and grows well in full sun or part shade.

All content from Kiddle encyclopedia articles (including the article images and facts) can be freely used under Attribution-ShareAlike license, unless stated otherwise. Cite this article:
Finke River mallee Facts for Kids. Kiddle Encyclopedia.