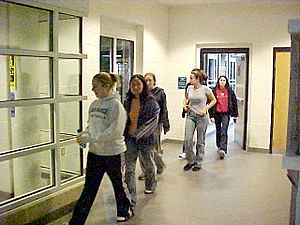 College students leave a dormitory at James Madison University, during a fire drill.

A fire drill is a sudden practice event, where people leave a building. They are practicing what they would do if there was a fire in the building. The event is started when the fire alarm goes off. The fire alarm sound can either be a continuous metal bell, a horn or a two-tone siren. Some old alarms in the UK like the Chloride Gent Warbler will curve between the two tones. The entire building is evacuated and everybody leaves the building using the nearest fire exit. At a school, college or university, the teacher or the lecturer counts the people outside to find out if anyone is missing. Sometimes people are evacuated when a drill is not scheduled by the school. This is called a false alarm. There are rules and regulations in place where fire alarm devices should be tested on a weekly basis. If the fire alarm sounds and the building is not evacuated, this may be due to the a scheduled fire alarm test that people already know about.

In the United Kingdom, the law recommends that all schools must do a fire drill every term. But with the current UK government laws, any organization in the UK should conduct a fire drill once a year. In addition to sounding the fire alarms for regular fire drills during term time, regular health and safety checks such as testing fire alarm systems and fire extinguishers must be done weekly. During half term holidays and breaks, these tests are often done during the day so that staff who work during term time know what the fire alarm sounds like. The fire alarm in the United Kingdom sounds either a continuous two tone buzzer or a beep similar to an electronic game beeping in test mode. Sometimes depending on the sounder used, the buzzer can curve between the two tones. In the United States, different states have laws that say how often schools must have fire drills. For example, in many states, schools must have one fire drill per month and fire alarms can either be continuous, or set to different codes such as code 3.

Fire drills commonly take place in schools, colleges and public companies. In public transport such as cruise ships, it is called a muster drill. Fire drills aren't done on airplanes, but a safety demonstration that shows the emergency procedures of the aircraft is done instead. If an aircraft is about to perform an emergency landing, the passangers on the aircraft are told to take the safety brace position on hearing the "brace" command.

Different ways of having fire drills

During fire drills, some schools block exits with a piece of cardboard or something else that is supposed to stand for a fire. This makes people practice finding another way out of the building.

All content from Kiddle encyclopedia articles (including the article images and facts) can be freely used under Attribution-ShareAlike license, unless stated otherwise. Cite this article:
Fire drill Facts for Kids. Kiddle Encyclopedia.