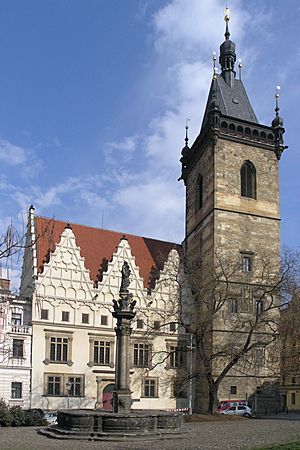 The town hall where it happened

The First defenestration of Prague happened on July 30, 1419. It marks the beginning of the Hussite wars. Jan Hus had been burnt at the stake, at the Council of Constance four years earlier. On July 30, Hussites stormed the Prague town hall, to free other Hussites who had been captured.

At the event, ten people were thrown out of the window: the mayor, two councillors, an aide of the judge, five elders, and a serf. Falling out of the window usually did not kill them. The crowd used blunt weapons to kill those that had fallen. One councillor died while he was being tortured. Johann von Seelau had planned the uprising. In 1960, a statue was put in front of the town hall to commemorate the Jan von Seelau.

All content from Kiddle encyclopedia articles (including the article images and facts) can be freely used under Attribution-ShareAlike license, unless stated otherwise. Cite this article:
First defenestration of Prague Facts for Kids. Kiddle Encyclopedia.