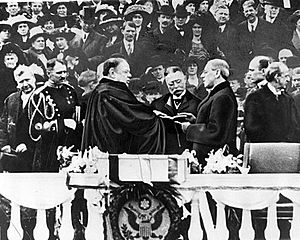 The first inauguration of Woodrow Wilson took place on March 4, 1913. It was the beginning of his position as the 28th President of the United States and Thomas R. Marshall's tenure as Vice President.

Chief Justice Edward D. White administered the oath of office. Wilson wanted and asked that the inaugural ball to be canceled. He found it inappropriate for the occasion because of women's suffrage and women's rights protesting.

All content from Kiddle encyclopedia articles (including the article images and facts) can be freely used under Attribution-ShareAlike license, unless stated otherwise. Cite this article:
First inauguration of Woodrow Wilson Facts for Kids. Kiddle Encyclopedia.