Fitch Creek is a tributary of the Susquehanna River in Wyoming County, Pennsylvania, in the United States. It is approximately 2.0 miles (3.2 km) long and flows through Falls Township. The watershed of the creek has an area of 2.52 square miles (6.5 km2). The creek is not designated as an impaired waterbody. Its drainage basin is designated as a Coldwater Fishery and a Migratory Fishery. 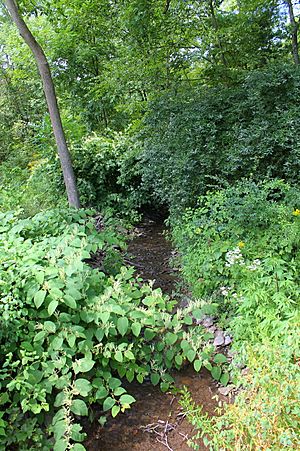 Fitch Creek is not designated as an impaired waterbody.

The surficial geology near the mouth of Fitch Creek mainly consists of alluvium, Wisconsinan Outwash, and sand and gravel pits. Further upstream, Wisconsinan Till is most prevalent, but there are also a few patches of Wisconsinan Ice-Contact Stratified Drift, bedrock, and lakes.

A hill known as Post Hill is located to the east of Fitch Creek.

The watershed of Fitch Creek has an area of 2.52 square miles (6.5 km2). The creek is entirely within the United States Geological Survey quadrangle of Ransom.

A waterfall known as the Fitch Creek Falls is on Fitch Creek. One reach of the creek flows alongside a road known as Evergreen Road at a distance of approximately 100 feet (30 m).

The designated use of Fitch Creek is for aquatic life.

A bridge carrying Pennsylvania Route 92 crosses Fitch Creek. As of October 2014, a bridge replacement project has been programmed for the bridge.

The drainage basin of Fitch Creek is designated as a Coldwater Fishery and a Migratory Fishery.

All content from Kiddle encyclopedia articles (including the article images and facts) can be freely used under Attribution-ShareAlike license, unless stated otherwise. Cite this article:
Fitch Creek Facts for Kids. Kiddle Encyclopedia.