Five Points Mall, formerly North Park Mall, was an enclosed shopping mall in Marion, Indiana. Opened in 1978, the mall's anchor stores are Roses Discount Store. Planet fitness is also a junior anchor. There are 3 vacant anchor stores that were once Sears, Carson's, and JCPenney. Outparcel properties include Subway and Buffalo Wild Wings. It is managed by Select Strategies.

Five Points Mall opening in 1978 as North Park Mall. One of its original anchor stores was Hills (became Ames in 1998, then Steve & Barry's in 2004, now Roses). Other early tenants included a Hank's Supermarket (which later became part of Lance's New Market) and Meis (later Elder-Beerman, and finally Carson's in 2011. Carson's Closed in 2018). Sears was later added in 1990. The movie theater, also an original tenant, closed in the late 1990s. In 2013, the Sears closed as a result of low sales of the 2011 holiday season. On January 15, 2014, JCPenney announced it was closing their Five Points location. On January 31, 2018, The Bon-Ton announced that the Carson's location would be closing. The store closed April 2018. In 2019 Most of the mall was boarded off, the only part that is open is by the former Carson's. An Applebee's remains open and has access to the remaining mall space. Roses and Planet Fitness (which opened in 2018 with exterior entrances only, and taking space formerly occupied by vacant storefronts including KB Toys, Hallmark, and Finish line) also are open but cannot access the mall. In 2019 the malls interior fully closed. Leaving no stores left except Roses, Applebee’s, and Planet Fitness. 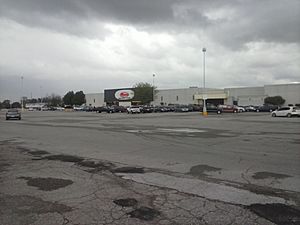 Roses at Five Points Mall
This Rose's is the very first store in Indiana.

All content from Kiddle encyclopedia articles (including the article images and facts) can be freely used under Attribution-ShareAlike license, unless stated otherwise. Cite this article:
Five Points Mall Facts for Kids. Kiddle Encyclopedia.