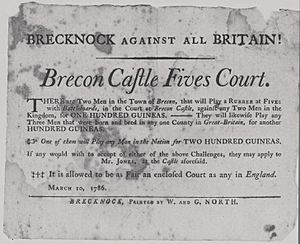 A public notice of a Fives competition at Brecon in 1786

Fives is a British sport believed to come from the same origins as many racket sports. In fives, a ball is propelled against the walls of a special court using gloved or bare hands as though they were a racquet.

The name may be derived from the slang expression "a bunch of fives" (meaning a fist). The game has also been known as hand-tennis and historically was often played between the buttresses of church buildings in England. There are links between Fives and the Irish and North American handball games and indeed, in recent years, British clubs have begun to establish ties with clubs in those countries.

Fives is not the same as Long Fives, which is played in a real tennis court.

All content from Kiddle encyclopedia articles (including the article images and facts) can be freely used under Attribution-ShareAlike license, unless stated otherwise. Cite this article:
Fives Facts for Kids. Kiddle Encyclopedia.