Flag and coat of arms of Pennsylvania facts for kids 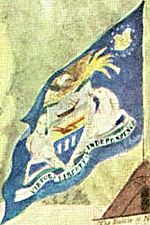 The flag as it appears in an 1819 painting

Originally authorized by the state in 1799, the current design was enacted by law in 1907.

In the summer of 2005, a bill was introduced to the state legislature to add "Pennsylvania" to the bottom of the flag in golden letters. The Pennsylvania House of Representatives voted in favor of the change. The legislation was proposed by State Representative Tim Solobay. The Senate has not yet taken action on the bill.

Flag of the governor

In 2001, the North American Vexillological Association surveyed its members on the designs of the 72 U.S. state, U.S. territorial and Canadian provincial flags. The survey ranked Pennsylvania's flag 57th out of the 72.

Besides being used by itself, the coat of arms is used on many governmental seals of the state, as well as the flag of the Governor.

All content from Kiddle encyclopedia articles (including the article images and facts) can be freely used under Attribution-ShareAlike license, unless stated otherwise. Cite this article:
Flag and coat of arms of Pennsylvania Facts for Kids. Kiddle Encyclopedia.