Flag of Barbados facts for kids 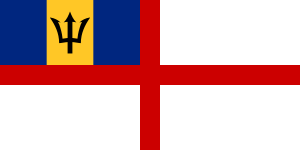 The national flag of Barbados was started on 30 November 1966. That was the island's first Independence Day. It has a triband of two bands of ultramarine. These are said to stand for the ocean. The middle band is golden. This is for the sand on the island. A black trident-head is centred in the golden band. The broken lower part is a symbolic break from its status as a colony. The three points of the trident are for the three principles of democracy - 1) government of, 2) for, and 3) by the people.

The design for the flag was made by Grantley W. Prescod. There was an open competition put on by the Barbados government. Over a thousand entries were received.

All content from Kiddle encyclopedia articles (including the article images and facts) can be freely used under Attribution-ShareAlike license, unless stated otherwise. Cite this article:
Flag of Barbados Facts for Kids. Kiddle Encyclopedia.