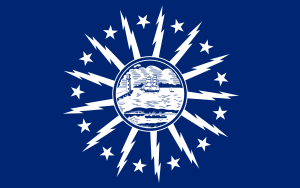 Municipal flag of the city of Buffalo. Flag ratio: 5:8

The municipal flag of Buffalo is the official banner of the city of Buffalo, New York. The navy blue flag contains a large central emblem consisting of the city seal with 13 "electric flashes" (depicted as lightning bolts) and interspaced 5-pointed white stars emanating from it.

The first flag of Buffalo was adopted by the Common Council in 1912. Following a request from New York City publisher, the Julius Bien Company, to provide a copy of the banner graphic for a work depicting the flags of large municipalities, mayor L.P. Fuhrmann and Commissioner of Public Works, Francis G. Ward, proposed a design. The city's first flag was composed of the city seal superimposed on the state coat-of-arms in blue over a buff-colored background.

To the left center a lighthouse on pier with ship passing it into harbor. To the lower right canal boat passing into canal to the right surrounded in circle by the legend "City of Buffalo, Incorporated 1832."

In accordance with the latter rule we submit as a design for the Municipal Flag of the City of Buffalo, the following:

"The Coat of Arms of the State of New York with the Seal of the City of Buffalo superimposed upon the shield of the same all in blue upon the field of the flag in Continental buff."

(Despite the assertion above, no such "general practice" of superimposing city seals over state seals has been documented.)

Though the Common Council passed an ordinance describing the official seal of the city and its flag, the seal described was not the one included on the banner. At the time there were several seals being used by various city officials. The seal depicted on the flag was actually the seal being used by the Mayor. There are a few differences, the most glaring being the legend surrounding the circle says "Seal of the City of Buffalo" instead of "City of Buffalo, Incorporated 1832." The Mayoral seal also depicts two mules, nonexistent in the Common Council version, pulling the canal boat in the opposite direction described by the Council. The large ship and the pier are also completely different.

In 1922, mayor Francis X. Schwab remarked to the Common Council that the flag did not sufficiently represent the city and proposed a contest for a new flag. After the contest failed to produce a winning design, a new contest was proposed with a more substantial reward. Seventy-three designs were submitted and the City Planning Committee with input from the Fine Arts Academy selected the new flag based on its simplicity and distinctiveness. The $250 reward was given to local architect Louis Greenstein. The flag was adopted on May 7, 1924, and dedicated to the city on the following Flag Day, June 14, 1924.

The city flag is meant to illustrate the energy and zeal behind the spirit of Buffalo. According to then mayor Schwab, it signifies the love and admiration which Buffalonians have for their city.

The thirteen stars signify New York's status as one of the original Thirteen Colonies. The matching number of electric flashes celebrate Buffalo as one of the first cities to deploy electric service widely.

All content from Kiddle encyclopedia articles (including the article images and facts) can be freely used under Attribution-ShareAlike license, unless stated otherwise. Cite this article:
Flag of Buffalo, New York Facts for Kids. Kiddle Encyclopedia.