Flag of Cincinnati facts for kids

The flag of Cincinnati is the municipal banner of the city of Cincinnati, Ohio, in the United States. The design was selected in an 1896 contest. It was formally adopted on June 15, 1940.

The Cincinnati city flag is defined by city ordinance:

The blue waves represent the Ohio River, upon which the city was founded. The red "C" in the center stands for Cincinnati and a red buckeye leaf rests atop the letter to symbolize the State of Ohio. The center of the C features most of the Seal of Cincinnati, including the winged rod (commerce), serpents (wisdom), scales (justice), and a sword (authority and power). The motto on the flag, Juncta Juvant, is derived from a Latin phrase meaning "Unity Assists".

On November 23, 1895, The Cincinnati Times-Star ran an editorial proposing a contest to choose a flag for the city, offering a $50 prize. Mayor John A. Caldwell appointed a Flag Commission to judge submissions. At least 50 designs were submitted by local artists, but only four won conditional approval. Many designs were rejected for being too elaborate or for symbolizing the Queen City with a crown, a device the mayor considered inappropriate for a U.S. city. On January 24, 1896, the commission awarded the $50 to "Zero of Burnet Woods", Emil Rothengatter (1848–1939), for the design that is in use today. A German immigrant, Rothengatter was an influential designer of circus posters during the heyday of that genre.

The Enquirer, the Times-Star's commercial and political rival, registered vehement opposition to the proposed flag. Editorials and interviewees protested that any local flag would compete with the Stars and Stripes and even replace it in some contexts. However, Mayor Caldwell was careful to describe the flag as a mere logo to advertise the city. There was also concern that Cincinnati would be unable to protect the flag's design from misuse. Cleveland had recently adopted a municipal flag, only to see it immediately trademarked by a cigar manufacturer; the Enquirer warned that a brewery intended to do likewise in Cincinnati. It was unknown whether a municipal government could secure a copyright for its flag. For its part, the Cleveland Plain Dealer dismissed the flag as a "garter".

A fact that went unreported in the Enquirer was that, on the day of the flag's selection, the Times-Star editor, Rep. Charles Phelps Taft, had Congress grant the city exclusive rights to the design. Nevertheless, the city council (known then as the Board of Legislature) voted down a measure that would have made the flag official. There was still some measure of support for the flag: within the month, Reds manager Frank Bancroft ordered a set for League Park. By 1902, one author noted that the flag had in fact become quite popular. It would not be formally adopted until June 15, 1940, as City Ordinance 181-1940. The ordinance was originally codified as C.O. 104-2, then renumbered as C.M.C. 104-3 on January 1, 1972.

In a 2004 poll on the North American Vexillological Association website, Cincinnati's flag was voted the 22nd best design among 150 U.S. city flags and the best city flag in Ohio. 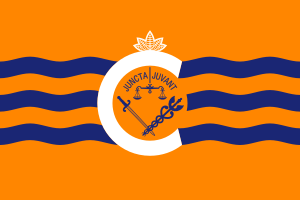 A variant of the flag featuring the colors of FC Cincinnati

In 2016, fans of the soccer club FC Cincinnati began using blue and orange variants of the flag to show support for the team.

All content from Kiddle encyclopedia articles (including the article images and facts) can be freely used under Attribution-ShareAlike license, unless stated otherwise. Cite this article:
Flag of Cincinnati Facts for Kids. Kiddle Encyclopedia.