Flag of Myanmar facts for kids 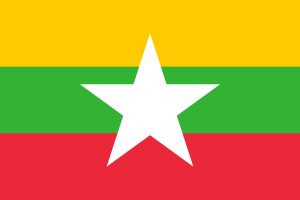 The flag of Myanmar

The current flag of Myanmar (also known as Burma) was adopted on 21 October 2010 to replace the former flag in use since 1974.

It has a horizontal bands of yellow, green and red; charged with a large white five-pointed star at the centre.

All content from Kiddle encyclopedia articles (including the article images and facts) can be freely used under Attribution-ShareAlike license, unless stated otherwise. Cite this article:
Flag of Myanmar Facts for Kids. Kiddle Encyclopedia.