Flag of Philadelphia facts for kids 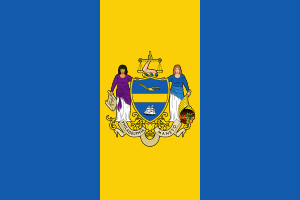 The flag of Philadelphia is the municipal flag of the city of Philadelphia, Pennsylvania. The flag is a yellow-on-blue bicolor vertical triband defaced with the seal of the city; the Philadelphia City Code defines the flag as "divided vertically in 3 equal parts, of which the first and third shall be azure blue and the middle pale golden yellow" with the city seal on the center of the yellow stripe; flags displayed by entities other than the municipal government often omit the seal. The dimensions of the flag are "10 feet long and 6 feet wide, or similar proportions". Official but seldom seen variations include a Merchant Flag, Pennant, and Streamer. The blue and yellow colors commemorate the original Swedish colonization of Philadelphia. One flag manufacturer who supplies flags to the city government stated that the shade of blue used is "UN Blue" (the same shade used in the United Nations flag. ).

The current version of the coat of arms was designed by Henry Christopher McCook and adopted by City Council in 1874. According to the City Code, the City Seal is "ARMS -- On a blue field, a fess golden between a plough above and a ship in full sail below; both proper. CREST -- A right arm, nude, embowed, couped at shoulder, holding a pair of scales; all proper. SUPPORTERS -- Two females, standing full face, the one on the right side of the shield habited white and purple, crowned with an olive wreath; in her right hand a scroll, charged with an anchor; all proper; the one on the left side habited white and blue; in her left hand a cornucopia, proper. MOTTO -- PHILADELPHIA MANETO." According to an attorney for the City, the supporters represent "Peace" and "Plenty"

All content from Kiddle encyclopedia articles (including the article images and facts) can be freely used under Attribution-ShareAlike license, unless stated otherwise. Cite this article:
Flag of Philadelphia Facts for Kids. Kiddle Encyclopedia.