Flag of Pittsburgh facts for kids

The flag of Pittsburgh, Pennsylvania, is a triband flag featuring vertical bands of black and gold and the city's coat of arms in the center.

In 2004, the flag was ranked as the twenty-fourth best flag design out of 150 city flags by the North American Vexillological Association, and was the top-rated tricolor.

In tribute to the flag, all four professional athletic teams in Pittsburgh in the sports of baseball, football, hockey, and soccer are black and gold. The arms are based on those of William Pitt, 1st Earl of Chatham, namesake of the city.

Design of the flag

The flag is defined in the Code of Ordinances, City of Pittsburgh, Title I, Article I, Chapter 103, Section 3 as follows:

(a) The following shall be the forms, devices and colors of the City civic flag, ensign, pennant and streamer: the colors in the several forms shall be black and gold, of the hues or tints as expressed upon the pattern, and the exact copy of which is on file in the office of the City Clerk.

(b) The civic flag, or standard of the City, shall be as follows: the material shall be American-made bunting or silk of the colors or hues above designated, ten (10) feet in length and six (6) feet in width, or in proportion thereto. The same shall be parted vertically per pale in three (3) equal parts, of which the first and [third] shall be black and the second or middle pale gold. Upon the latter shall be blazoned the City arms, as borne upon the City seal, and the same shall be blazoned upon the middle, and occupy one-third (1/3) of the surface thereof.

The civic flag shall be displayed upon public building, at meetings of Councils and upon suitable public occasions, provided that it shall never be displayed in any position that indicates superiority or precedence to the United States flag.

(c) The City ensign or merchant flag shall be composed and parted as provided for the civic flag or standard in subsection (b) hereof; except that instead of the entire City arms there shall be blazoned upon the central pale the crest of the City arms, surrounded by thirteen (13) five-pointed dark blue stars, in a circle, whose diameter shall be four-fifths (4/5) of the width of the pale. The length or fly shall be six (6) feet, the depth or hoist four (4) feet six (6) inches or in proportion thereto.

(e) The City streamer shall be made of materials and colors above indicated two (2) feet in width and fifteen (15) feet in length, or in proportion thereto. The black shall be borne next to the staff, and shall be in length one-fourth (1/4) the length of the streamer, and shall bear upon the center thereof the City crest, gold or gilded. 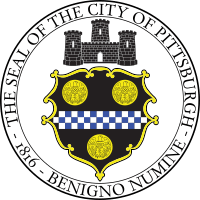 The Great Seal of the City of Pittsburgh, Pennsylvania 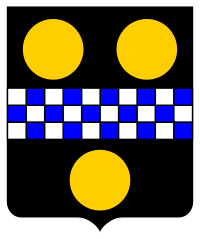 The arms of William Pitt, Earl of Chatham form the basis for the arms of Pittsburgh

The phrase Benigno Numine was the motto of the Earl of Chatham. It is generally translated as "With the Benevolent Deity" or "By the Favour of the Heavens".

It was adopted by the newly formed city in 1816 but somehow fell off seals and official documents and emblems in the early 20th century before being restored to the seal by City Council on July 3, 1950 and signed off by the Mayor on July 7, 1950. However even then the motto was not implemented until council looked into the matter in November 1958.

Coat of arms and seal

The official blazon of the city's coat of arms, as defined by a 1925 city ordinance, is as follows:

On a field Sable, a fess chequay Argent et Azure, between three bezants bearing eagles rising with wings displayed and inverted Or. For crest, Sable a triple-towered castle masoned Argent.

The design of the seal of Pittsburgh, is defined in the Code of Ordinances, City of Pittsburgh, Title I, Article I, Chapter 103, Section 2 as follows:

(a) The great seal of the City and the lesser seals of the same shall be of the following design:

(1) The great seal is a circle bearing in its center the arms and the crest of the City and upon its periphery a belt or band of Roman capital letters forming the legend "The Seal of the City of Pittsburgh, 1816, Benigno Numine."

(2) Lesser seals are the great seal of the City with this addition: on an arc of a circle having the same center as, but shorter radius than, the aforesaid legend, and placed directly below the City arms, the proper designation of the sealing office, as "Office of the Mayor," "Office of the City Clerk" or the like, such designation to be in Roman capital letters, smaller than, but of like face to those used in the peripheral legend.

All content from Kiddle encyclopedia articles (including the article images and facts) can be freely used under Attribution-ShareAlike license, unless stated otherwise. Cite this article:
Flag of Pittsburgh Facts for Kids. Kiddle Encyclopedia.