Flag of the Governor-General of New Zealand facts for kids 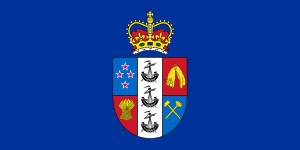 Flag of the Governor-General of New Zealand

New Zealand was established as the Colony of New Zealand, separate from New South Wales, in 1841. The colony became self-governing in 1853 following the passing of the New Zealand Constitution Act 1852. In 1869 the Admiralty directed that "Governors ...administering the Governments of British Colonies and Dependencies be authorised to fly the Union Jack, with the Arms or Badge of the Colony emblazoned in the centre thereof". There was at the time no colonial badge for New Zealand.

Accordingly, in October 1869 the decision was made of including a Jack with the "Southern Cross, as represented in the Blue Ensign by four five-pointed red stars in the fly, with white borders to correspond to the colouring of the Jack; in the Jack by four five-pointed white stars on the red ground of the St George's Cross; and in the pendant by four stars near the staff similar to those in the Ensign".

In October 1874 Sir James Fergusson announced "... that the seal or badge to be worn in the Union Jack used by the Governor of New Zealand when embarked in any boat or other vessel shall be the Southern Cross as represented by four five-pointed red stars emblazoned on the white shield aforesaid, and the monogram NZ in red letters in the centre of the Southern Cross."

Succeeding Governors found it convenient to use this flag on shore and it became accepted as the official vice-regal flag.

In 1907 New Zealand's status was officially transformed from self-governing colony to dominion. To mark the transition to independence, the New Zealand Government requested that the garland of laurels on the Governor’s flag should be replaced by one of fern leaves, the fern leaf was already recognised as one of New Zealand's national symbols.

In a letter of 5 January 1908 the Governor requested that the garland around the badge on his flag be changed from the usual green laurel leaves to a garland of fern leaves, and referred to the garland of maple leaves surrounding the badge on the Flag of the Governor General of Canada as a precedent. This was approved without hesitation, since the regulations only stipulated that the device on the flags of Governors should be surrounded by a "green garland". The type of leaves was not specified.

As neither Governor-General Lord Bledisloe nor his ministers were sympathetic to the change, the old flag was retained, and the new flag was not flown until after Lord Galway's arrival.

Minor stylistic changes were made around 1953, including changing the scroll's text to "New Zealand".

On 2 June 2008 a new design was adopted, the timing coinciding with the official observance of the Queen's birthday.

The flag is protected under the Flags, Emblems, and Names Protection Act 1981, Section 12(1) states:

According to Section 12(2)(d), this applies to, among others, "any representation of the Governor-General’s flag".

All content from Kiddle encyclopedia articles (including the article images and facts) can be freely used under Attribution-ShareAlike license, unless stated otherwise. Cite this article:
Flag of the Governor-General of New Zealand Facts for Kids. Kiddle Encyclopedia.