Coat of arms of New Zealand facts for kids 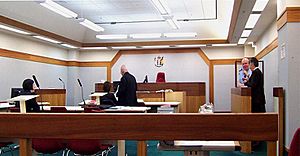 The coat of arms is displayed in public buildings such as the Wellington District Court.

Until 1911, New Zealand used the same royal coat of arms as the United Kingdom. When New Zealand became a Dominion in 1907, it was decided that a new coat of arms was required, and a design competition was held in 1908. The winning entry was a design by James McDonald, a draughtsman in the Department of Tourist and Health Resorts. Some adjustments were made to the design and the arms were granted by Royal Warrant of King George V on 26 August 1911. The warrant was published in the New Zealand Gazette of 11 January 1912.

Since being granted its own arms in 1911, New Zealand's arms have remained similar to the current design, with minor changes in 1956. Since 1911, the central shield has remained unaltered: a quartered shield containing in the first quarter four stars representing the Southern Cross constellation, as depicted on the national flag, but with the stars in different proportions; in the second quarter, a golden fleece representing the farming industry; in the third, a wheat sheaf representing agriculture; and in the fourth, two hammers representing mining and industry. Over all this is a pale, a broad vertical strip, with three ships representing the importance of sea trade, and the immigrant nature of all New Zealanders.

Before 1956, the shield was identical, but the surrounding features were different. The crest was a demi-lion (the upper half of a rampant lion) holding the British Union Flag, and the scroll at the shield's base featured the then motto of the country, "Onward". Early renditions of the coat of arms are often featured with more stylised scrolling rather than fern leaves.

The original supporters were also slightly different. The woman had reddish-brown hair, and both figures faced forward rather than towards the shield. Though there is no direct documentary evidence, it is likely that the original model for the woman was Wellington socialite Alice Spragg. The model for the Māori warrior is unknown. The woman is identified as Zealandia, the national personification of New Zealand.

Arms: Quarterly, Azure and Gules on a Pale Argent three Lymphads Sable, between in the first quarter four Mullets in cross Gules, fimbriated Argent, in the second a Fleece; in the third a Garb, and in the last two Mining Hammers in Saltire, all Or. Crest: the Crown of Saint Edward proper. Supporters: On the dexter side, a female figure proper vested Argent supporting in the dexter hand a Flag-staff proper, hoisted thereon the Ensign of the Dominion of New Zealand, and on the sinister side a Maori Rangatira vested proper holding in his dexter hand a Taiaha all proper. Motto: New Zealand. The Compartment which is what the Supporters stand on is not always part of the Blazon but in this case it is two New Zealand Ferns in their natural colour.

The shield is first described. "Quarterly" means that the shield is divided into quarters by a vertical and horizontal line. "Azure and Gules" which is blue and red respectively is the colour of the quarters. The top left quarter is the first quarter and of the first colour and the top right is of the second colour. The colouring proceeds chequer-board fashion for the lower left and lower right quarters. "On a Pale." A pale is a vertical stripe placed over the central part of the shield, partially blocking parts of the quarters. "Argent" means silver or white and is the colour of the pale. Then the objects on the pale are described. A "Lymphad" is a sailing ship and there are three of them and "sable" is black. Therefore, three black sailing ships.

"In the First" is in the first quarter and the objects thereon are described. A "Mullet" is a five pointed star and "in cross" means that the four stars are placed as in a Christian cross. "Of the last" means the last colour mentioned after the quartering, vis argent (white.) "Each surmounted by a Mullet" means that another slightly smaller star is placed on top of each white star and "of the second" means these are of the second colour mentioned which is gules or red. The reason for the white border on the stars is the heraldic rule that a colour cannot be placed on a colour. E.g. red on blue. "Argent" is silver, or white as it is usually depicted, and is considered a metal. A colour on a metal or vice versa is heraldically correct. E.g. silver on blue. The same rules apply on the New Zealand flag.

"In the Second" means in the second quarter is a "fleece" which is usually shown as a whole sheep with a band around its middle. "In the third" is the third quarter and a "garb" is a wheat sheaf. "In the last" is the fourth quarter with "two mining hammers." These are "in Saltire" which means they are crossed X like. The "all Or" is the colour of all of the last three objects. "Or" is gold, or yellow as it is usually shown so the fleece, the wheat sheaf, and the hammers are all coloured gold. Gold is also considered a metal. Crest. "The Crown of Saint Edward" is a crown sometimes used by the Queen and "proper" means it is shown in its natural colours.

Since 1956 the New Zealand coat of arms has always been depicted in the same way. This is because the New Zealand Government has chosen to do so. However the actual graphic depiction of a Blazon is not set in stone and another heraldic artist could draw the Arms in a different style while still retaining the essential elements. This is true of all Coats of Arms. See Blazon.

The coat of arms depicts a shield with four quadrants divided by a central "pale". The first quadrant depicts the four stars on the flag of New Zealand; the second quadrant depicts a golden fleece, representing the nation's farming industry; the third depicts a sheaf of wheat for agriculture; and the fourth quadrant depicts crossed hammers for mining. The central pale depicts three galleys, representing New Zealand's maritime nature and also the Cook Strait. The Dexter supporter is a European woman carrying the flag of New Zealand, while the Sinister supporter is a Maori Warrior holding a Taiaha (Fighting weapon) and wearing a Kaitaka (flax cloak). The Shield is topped by the Crown of St. Edward, the Monarch of New Zealand's Crown. Below is a scroll with "New Zealand" on it, behind which (constituting the "heraldic compartment" on which the supporters stand) are two fern branches. 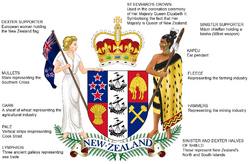 One month prior to New Zealand's adoption of the Statute of Westminster on 25 September 1947, a special committee was formed by then Prime Minister Peter Fraser. The committee was responsible for the "redrawing and standardisation of the Coat of Arms." Consisting of Alistair McIntosh, Joseph Heenan, Dr Colin Aickman, Frank Corner, Foss Shanahan and Professor John Cawte Beaglehole. One of the committee's concerns was that the female supporter looked too much like a "Soviet heroine". Following the election of the first National Government in 1949, the new Attorney-General, Jack Marshall (later Deputy Prime Minister and Prime Minister) took up responsibility for the committee. Marshall requested the woman to be re-drawn based on the likeness of Grace Kelly, a favourite actress of his.

The shield is now supported by two figures, a blonde woman of European descent holding the New Zealand flag, and a Māori warrior holding a taiaha (Māori ceremonial spear). The shield is topped with the St Edward's Crown, and beneath the shield are two silver fern leaves and a scroll bearing the words "New Zealand".

The woman is said by some to be a depiction of Zealandia, a common national personification of New Zealand during the first half of the 20th century.

The coat of arms are the basis of the Queen's Personal New Zealand Flag.

The coat of arms is for use by the New Zealand government only. On some occasions, such as royal visits or jubilee celebrations, individuals and organisations can display it temporarily. It can only be used or published with the permission of the Ministry for Culture and Heritage.

All content from Kiddle encyclopedia articles (including the article images and facts) can be freely used under Attribution-ShareAlike license, unless stated otherwise. Cite this article:
Coat of arms of New Zealand Facts for Kids. Kiddle Encyclopedia.