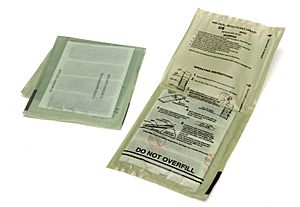 A pair of flameless ration heaters

A flameless ration heater (FRH) is a form of self-heating food packaging included with meals, ready-to-eat (MREs), used to heat the food. United States military specifications for the heater require it be capable of raising the temperature of an 8-ounce (230 g) entrée (American English for main course) by 100 °F (38 °C) in twelve minutes, and that it has no visible flame. 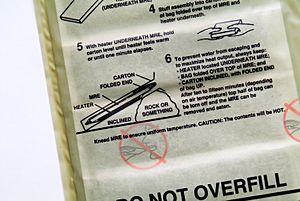 This reaction is analogous to iron being rusted by oxygen, and proceeds at about the same slow rate, which is too slow to generate usable heat. To accelerate the reaction, metallic iron particles and table salt (NaCl) are mixed with the magnesium particles.

Iron and magnesium metals, when suspended in an electrolyte, form a galvanic cell that can generate electricity. When water is added to a ration heater, it dissolves the salt to form a salt-water electrolyte, thereby turning each particle of magnesium and iron into a tiny battery. Because the magnesium and iron particles are in contact, they essentially become thousands of tiny short-circuited batteries which quickly burn out, producing heat in a process the patent holders call "supercorroding galvanic cells".

The United States Department of Transportation (DOT) Federal Aviation Administration (FAA) conducted testing and released a report which in summary states "... the release of hydrogen gas from these flameless ration heaters is of a sufficient quantity to pose a potential hazard on board a passenger aircraft." This testing was performed on commercial grade 'heater meals' which consisted of an unenclosed flameless heat pouch, a bag of salt water, a styrofoam saucer/tray and a meal in a sealed, microwavable/boilable bowl.

All content from Kiddle encyclopedia articles (including the article images and facts) can be freely used under Attribution-ShareAlike license, unless stated otherwise. Cite this article:
Flameless ration heater Facts for Kids. Kiddle Encyclopedia.