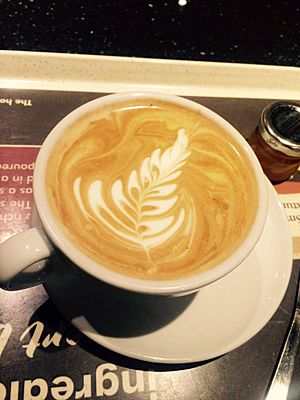 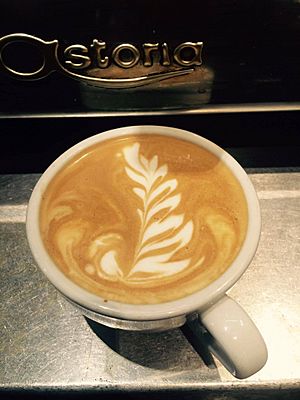 Example of a flat white 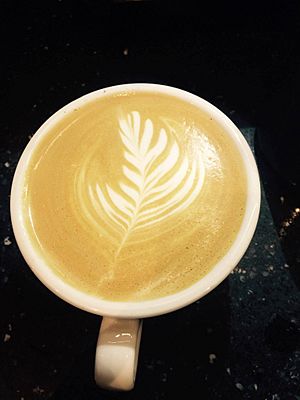 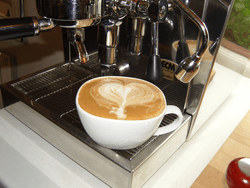 A flat white with latte art

A flat white is an espresso-based coffee drink. It is prepared by pouring microfoam (steamed milk with small, fine bubbles with a glossy or velvety consistency) into a single or double shot of espresso. It is somewhat similar to the caffè latte although smaller in volume and less microfoam, therefore having a higher proportion of coffee to milk, and milk that is more velvety in consistency – allowing the espresso to dominate the flavour, while being supported by the milk.

A flat white is sometimes served in a ceramic 5 oz/140 mL vitrified cup with saucer. Milk is frothed as it would be for a Cappuccino but held back to around 20 mm/1 inch of microfoam, creating a meniscus. Key to the beverage is the crema being coaxed into the meniscus resulting in a uniform dark brown colour across the top of the beverage. Allowing the beverage to stand before drinking enhances the experience as the meniscus thickens and adds texture to each sip, resulting in distinct sip rings/tide marks as the beverage is consumed. A flat white traditionally does not incorporate latte art.

According to a survey of industry commentators, a flat white has several defining characteristics, chief among which is a thin layer of velvety microfoam (hence the ‘flat’ in flat white), as opposed to the significantly thicker layer of foam in a traditional cappuccino.

The earliest documented reference to the beverage dates back to Australia in the mid 1980s with appearance of the flat white at Moors Espresso Bar in Sydney. Alan Preston added the beverage to his permanent menu in 1985. Other documented references include cafes in Canberra putting up signs in 1985 saying "flat white only" during a seasonal problem with milk that prevented the normal milk froth forming.

It is essentially the opposite of a "dry cappuccino", which has dry frothy foam but no liquid milk. A flat white has milk (or microfoam) but no froth.

Outside of Australia and New Zealand, the style was exported to the United Kingdom by 2005, and by 2010 was being sold in Starbucks franchises there. By 2013 the flat white was available in Australian cafés in New York City, with Hugh Jackman co-owning one of them and endorsing the product. With the flat white becoming increasingly well known globally, very large coffee shop chains such as Starbucks, Costa Coffee, Caffè Nero and Pret a Manger added flat whites to their menus, with Starbucks releasing the flat white to American stores on 6 January 2015.

All content from Kiddle encyclopedia articles (including the article images and facts) can be freely used under Attribution-ShareAlike license, unless stated otherwise. Cite this article:
Flat white Facts for Kids. Kiddle Encyclopedia.