Fleming Key is an island off the northwest corner of the island of Key West, Florida in the lower Florida Keys. It is roughly 2 miles (3.2 km) long by 0.25 miles (400 m) wide.

It is connected to the island of Key West by the Fleming Key Bridge (Mustin Road), having 18 feet (5.5 m) of clearance over Fleming Key Cut, a small channel.

The island and bridge road are part of a section of the Naval Air Station Key West called Trumbo Point and are inaccessible to civilians without U.S. Navy clearance. The island has a 10 million gallon per day wastewater treatment plant. It also includes a dolphin research center and marine corrosion testing facility. 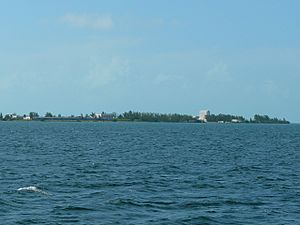 The northern portion of Fleming Key as seen from the east, showing several NAS structures

All content from Kiddle encyclopedia articles (including the article images and facts) can be freely used under Attribution-ShareAlike license, unless stated otherwise. Cite this article:
Fleming Key Facts for Kids. Kiddle Encyclopedia.