Flora of Saskatchewan facts for kids 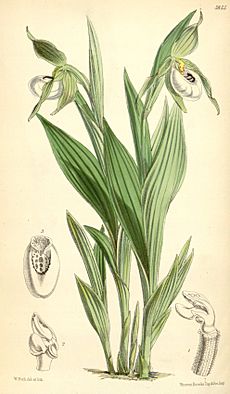 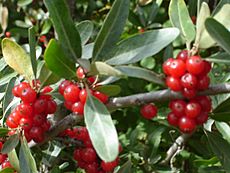 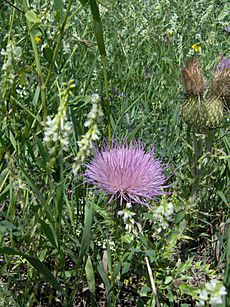 The native flora of Saskatchewan includes vascular plants, plus additional species of other plants and plant-like organisms such as algae, lichens and other fungi, and mosses. Non-native species of plants are recorded as established outside of cultivation in Saskatchewan, of these some non-native species remain beneficial for gardening, and agriculture, where others have become invasive, noxious weeds. Saskatchewan is committed to protecting species at risk in Canada. The growing season has been studied and classified into plant hardiness zones depending on length of growing season and climatic conditions. Biogeographic factors have also been divided into vegetative zones, floristic kingdoms, hardiness zones and ecoregions across Saskatchewan, and natural vegetation varies depending on elevation, moisture, soil type landforms, and weather. The study of ethnobotany uncovers the interrelation between humans and plants and the various ways people have used plants for economic reasons, food, medicine and technological developments. The Government of Saskatchewan has declared 3 indigenous plants as provincial symbols.

Saskatchewan possesses a continental climate and the seasonal variations in temperature provide a short growing season. On average the province supports 159 to 160 frost-free days, in the far north that number diminishes to 85 to 95 frost free days. In 1967, Canadian scientists created a map outlining Plant Hardiness Zones. The hardiness zones examine climatic gradations such as length of frost-free period, summer rainfall, maximum summer temperatures, minimum winter temperatures, and wind speed. The harshest plant environment is 0 and the mildest is rated as 8. Corresponding data was correlated for plant requirements. Such an examination provides direction to which flora may survive the geographical hardiness zone conditions. A development in the late 1800s encouraged homesteaders to pursue agriculture. Red Fife wheat (Triticum aestivum) matured 20 days before other wheats, which allowed plants to ripen before the autumn frost.

Saskatchewan has 367 rare species of vascular plants of which 135 of these have been listed as endangered.

Saskatchewan's commitment to the Accord for the Protection of Species at Risk in Canada, which was ratified by provinces, territories and the federal government in September of 1998,"

There is listed Small White Lady's Slipper (Cypripedium candidum) as the only local extinction, (extirpated) plant. Endangered plants include the Sand Verbena (Abronia micrantha), Western Spiderwort (Tradescantia occidentalis), Tiny Cryptantha (Cryptantha minima), and Hairy Prairie-Clover (Dalea villosa). Threatened plants include the Slender Mouse-Ear Cress (Halimolobos virgata). These two reports to aid in the protection of plants; Species at Risk In SK and Rare Plant Survey Guidelines. Saskatchewan has implemented The Weed Control Act to control plants introduced to Saskatchewan which have become a threat to the natural biodiversity such as leafy spurge (Euphorbia esula). There are two reports in this regard; Invasive Species and Noxious Weeds of Saskatchewan.

Section 15 (1) of the Act states: "Every owner or occupant of land shall:

(a) under the supervision of the weed inspector, eradicate any prohibited weeds located on the land;

(b) under the supervision of the weed inspector, eradicate any isolated infestations of noxious weeds located on the land;

(c) contain and control any established infestations of noxious weeds located on the land; and

(d) take measures to control any nuisance weeds located on the land."

Saskatchewan is within the Holarctic Kingdom. There are two regions within this kingdom, the Circumboreal floristic region or which provides a cool northern temperate zone and the North American Atlantic Region in Southern Saskatchewan which is part of a warmer Midwestern Plains zone. These zones are characterized by a certain degree of endemism.

An ecoregion encompasses soil types and landform similarities. The Taiga Shield ecozone in the far north includes the Selwyn Lake upland and Tazin Lake Upland ecoregion. This would have vegetation generally corresponding to the Subarctic Woodland. The Boreal Shield ecozone is further divided into the Athabasca Plain and Churchill River Upland, and this area of Northern Saskatchewan has been described by the World Wildlife Fund as part of the Midwestern Canadian Shield forests ecoregion. The ecozone Boreal Plains comprises the Mid-Boreal Upland, Mid-Boreal Lowland and Boreal Transition ecoregions. Further south is the Prairie ecozone which consists of the Aspen Parkland, Moist Mixed Prairie, Northern Mixed Grassland and Cypress Upland ecoregions. The ecoregions are further divided into Landscape Areas.

Several biogeographic factors contribute to the richness and diversity of Saskatchewan flora. From north to south there are a variety of vegetative zones. To the far north are the Subarctic Woodland and Northern Boreal Forest. The Southern Boreal Forest is south of the treeline. The Prairie is divided into the Aspen Parkland, Moist Mixed Grassland, Mixed Grassland, Cypress Upland and Fescue Grassland. In southeast Saskatchewan are Dry Mixed Prairie of the Great Sand Hills area and the Cypress Hills.

The circumpolar boreal forest or taiga is dominated by conifers or aspen and poplar stands. 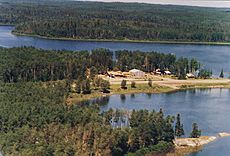 Throughout this area are lakes, bogs, forest and rock outcroppings. Black spruce, jack pine once again are the main trees of the area. Forest fires are a concern in this area, and Fireweed (Epilobium angustifolium) occurs in burnt areas. Cladonia cetraria and C. tereocaulon are lichen species which provide ground cover. Feather mosses such as Stair-Step Moss (Hylocomium splendens) and Hypnum are amongst the undergrowth. Where the rock is covered in soils, the forest takes on the characteristics and species of the Southern Boreal Forest ecozone. The plant hardiness zone would be Zone 0b.

The Athabasca Basin provides a separate ecosystem. The Athabasca Sand Hills protected by The Athabasca Sand Dunes Provincial Park are unique feature of the Canadian shield. The hills are located in northern Saskatchewan and border Lake Athabasca, which straddles the Alberta and Saskatchewan border. There is sparse plant life in the sand hills area. Blueberry, Bearberry (Arctostaphylos uva-ursi ), Sand Heather (Hudsonia tomentosa), Crowberry (Empetrum) and grasses survive here. In this ecozone there are 10 species of endemic plants. There are unique four species of Willow (Salix) 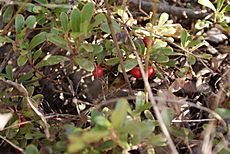 The ground cover is lichen and stairstep moss. Bearberry, low-bush cranberry (Vaccinium vitis-idaea), Red Osier Dogwood (Cornus sericea, syn. C. stolonifera, Swida sericea) predominate the shrub layer. Peatlands, fens, marsh complexes occur with wetter soils such as those found above the basin of the Quaternary Glacial Lake Agassiz in the south eastern portion of the Southern Boreal Forest. 16% of the boreal forest are wetlands which have a water table at or above ground level. The province is the world's largest producer of wild rice. 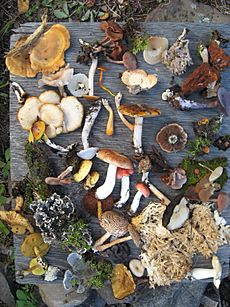 Mushrooms, lichens, moss and other bryophytes.

The Aspen parkland corresponds to the Transitional Grassland Ecoclimatic Region with lower precipitation and a higher average annual temperature of about 1.3 °C (34.3 °F). 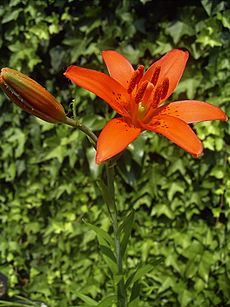 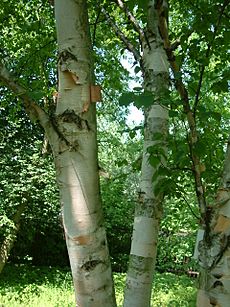 The western parkland has ground cover of plains rough fescue Needle and thread grass (Hesperostipa comata). Tree groves are aspen, willows and balsam poplar. Throughout the Aspen Parkland in low-lying areas with more moisture are dense shrub stands. Saskatoon (Amelanchier alnifolia), pin cherry (Prunus pensylvanica), choke cherry (Prunus virginiana), hawthorn (Crataegus), western snow berry (Symphoricarpos), woods rose (Rosa woodsii), Wolf willow (Elaeagnus commutata) and Canada buffaloberry (Shepherdia canadensis) are a few of the shrubs of the area. The marshes and prairie sloughs of the Aspen Parkland support flora similar to the marshlands of the Southern Boreal Forest. The Aspen Parkland ranges between 1b, 2a and 2b for plant hardiness areas.

Qu'Appelle Valley near Cutarm, Sask., circa 1910

The Cypress Hills has an elevation over 1,200 metres (3,900 ft), with cooler resulting temperatures and higher precipitation which are more similar to the boreal forest than the prairie grasslands.

There are many native plants of Saskatchewan which can be prepared as vegetables, teas, wine, jams, syrups and flour. Other plants have medicinal qualities. The harvest of various plants varies. Shoots, and leaves of some plants are harvested, while roots and tubers of others are picked like potatoes. When locating native plants, it is important to note which season to harvest them and what habitats to search for. Marshy pond edges reveal broad leaf cattail, or yellow pond lily (Nuphar advena). 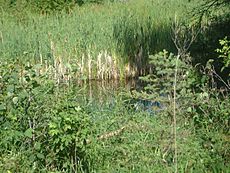 Disturbed sites produce chickweed, and plantain (Musa). Asparagus (Asparagus officinalis) shoots grow near roadsides. There are plants which are poisonous, and edible plants which have poisonous look alike.

Strawberry (Fragaria vesca), wild mint (Mentha arvensis), and Labrador tea leaves can be steeped in boiling water for tea. Saskatoons, blueberries and other berries can be hand-picked for jam, jelly, syrup and juice preparation. Blackberry, dewberry, blueberry, buffaloberry, currant, huckleberry, prickly pear, raspberry, and rose hips all make delicious jams or jellies. Pies can be made of currants, blackberries, mountain ash, or strawberries, for example. Hull grass seeds and grind them down into flour.

Herbal solutions used as remedies for ailments could be ingested as tea, used as ointments, or poultices or inhaled as smoke or steam from a decoction. Cow parsnip (Heracleum maximum) and broad-leaved water plantain (Alisma plantago-aquatica) are two herbal remedies which were cultivated by the Cree. However, the cow parsnip does have a poisonous look-alike species, the western water hemlock, (Cicuta douglasii, poison hemlock).

Flora of Saskatchewan have also aided humans in other ways; trees provide wood such as birch bark for canoes, reeds could be fashioned into whistles and baskets. Sphagnum mosses were used for their insulating qualities, as well mosses were absorbent for diapers, and had antibacterial properties. 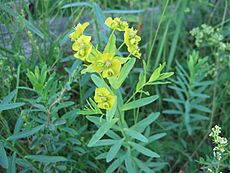 The results of these investigations between 1857 and 1861 resulted in reporting the area unsuitable for agriculture and an area of particularly dry land was named the Palliser's Triangle. John Macoun (1831-1920) was a naturalist who accompanied Sir Sanford Fleming to the prairies in 1872 and he offered agricultural possibilities for the region. Isabel M. Priestly (1893-1946) was a botanist who made botanical collections and formed the Yorkton Natural HIstory Society. Dr. William P. Fraser is the namesake of the W.P. Fraser Herbarium. His botanical collection was donated to the Biology Department at the University of Saskatchewan where he was a professor. Later the Fraser collections were transferred to the Department of Plant Ecology in the College of Agriculture. Dr. John K. Jeglum was a research botanist with Great Lakes Forestry Centre (GLFC). He received his doctorate at the University of Saskatchewan his thesis on Lowland vegetation at Candle Lake, Southern Boreal Forest Saskatchewan resulted in a collection of Saskatchewan specimens. 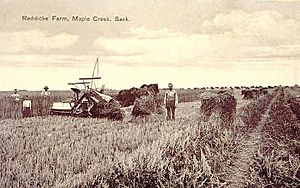 Agriculture in Saskatchewan is the production of various food, feed, or fiber commodities to fulfill domestic and international human and animal sustenance needs. The newest agricultural economy to be developed in renewable biofuel production or agricultural biomass which is marketed as ethanol or biodiesel. cultivation and livestock production have abandoned subsistence agricultural practices in favor of intensive technological farming resulting in cash crops which contribute to the economy of Saskatchewan. The particular commodity produced is dependent upon its particular biogeography or ecozone of Geography of Saskatchewan. Agricultural techniques and activities have evolved over the years. The first nation nomadic hunter-gatherer lifestyle and the early immigrant ox and plow farmer proving up on his quarter section of land in no way resemble the present farmer operating huge amounts of land or livestock with their attendant technological mechanization. 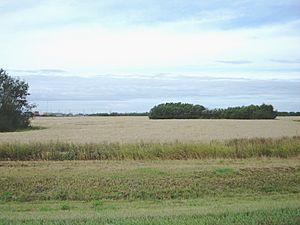 Grain field in the aspen parkland near Saskatoon

Challenges to the future of Saskatchewan agriculture include developing sustainable water management strategies for a cyclical drought prone climate in south western Saskatchewan, updating dryland farming techniques, stabilizing organic definitions or protocols and the decision to grow, or not to grow genetically modified foods. Domestically and internationally, some commodities have faced increased scrutiny from disease and the ensuing marketing issues.

Canada's production of wheat, oats, flaxseed, and barley come mainly from Saskatchewan and the prairie provinces. Saskatchewan still has cattle ranching along the southwestern corner of the province, However, grain farming and growing crops such as wheat, oats, flax, alfalfa, and rapeseed (especially canola) dominate the parkland area. Mixed grain farming, dairy farms, mixed livestock and grazing lands dot the central lowlands region of this prairie province. As of 1996, March 24 to 30, has been proclaimed Agriculture Week in Saskatchewan.

All content from Kiddle encyclopedia articles (including the article images and facts) can be freely used under Attribution-ShareAlike license, unless stated otherwise. Cite this article:
Flora of Saskatchewan Facts for Kids. Kiddle Encyclopedia.